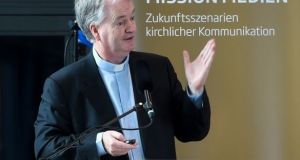 One of the most senior Irishmen in the Vatican Msgr Paul Tighe was ordained Bishop at St Peter’s Basilica in Rome on Saturday morning by Secretary of State Cardinal Pietro Parolin.

Last December Msgr Tighe was appointed titular Bishop of Drivastrum and Adjunct Secretary to the Vatican’s Council for Culture by Pope Francis.

Bishop Tighe is former director of the Communications and Public Affairs Office of the Dublin Archdiocese and, more recently, Secretary of the Vatican’s Council for Social Communications.

He was congratulated by the Catholic primate Archbishop Eamon Martin on his episcopal ordination, on behalf of all the Irish Catholic bishops, and by Archbishop of Dublin Diarmuid Martin who concelebrated the ordination Mass in St Peter’s with several other Dublin priests.

Paying tribute to Bishop Tighe, Archbishop Diarmuid Martin said he was a person of kindness and integrity whose contribution to life of the universal Church, particularly in social communications, was widely respected.Together with the priests of the archdiocese he wished Bishop Tighe every blessing in his ministry in the years to come and assured him of our prayers.

Bishop Paul Tighe was born in1958. He attended school in Navan Co Meath and completed his secondary education at Summerhill College, Sligo. He graduated from UCD in 1979 with a degree in civil Law. Having studied for the priesthood at Clonliffe College in Dublin, and at the Irish College in Rome, he was ordained in 1983. His first appointment was as parish chaplain and teacher in Ballyfermot.

Later he studied at the Gregorian University in Rome and in 1990 was appointed lecturer in Moral Theology at the Mater Dei Institute in Dublin and Clonliffe College. He was appointed head of the Theology Department in 2000. In 2004, he was named director of the Communications Office of Dublin Diocese and established its Office for Public Affairs in 2005.

In January 2007 he was appointed chaplain to Pope Benedict XVI and the title Monsignor. In November of that year Pope Benedict announced his appointment as Secretary of the Vatican’s Council for Social Communications.

1 When the RIC opened fire on a crowd in Ennis during the Clare grain riots
2 Bernie Sanders cements lead in Democratic race after win in Nevada
3 Coronavirus: Almost 60 new cases recorded in Italy as two die
4 Ryanair’s Michael O’Leary under fire for comments on Muslim men
5 Gardaí wish to speak to taxi driver after girl dies in Cork car crash
Real news has value SUBSCRIBE