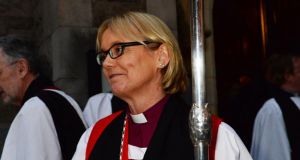 The married mother of two was consecrated at Christ Church Cathedral, Dublin in a two-hour service this afternoon led by the Archbishop of Dublin, The Most Rev Dr Michael Jackson.

In a homily the Rev Nigel Parker, guest preacher, paid tribute to her. “Pat, it has been our privilege over the years to see you respond to our Father’s love with love, trust and obedience,” he said.

“You have given yourself whole-heartedly to Him and His Church, serving His people as a deacon and priest — teaching the Scriptures and pastoring with that disarming directness, which is your hallmark — a directness, which speaks the truth in love, with a ready laugh and delightful sense of humour.

“You have demonstrated your love for the Father in your hard work, impeccable organisation and evangelistic heart, which longs to see people come into the family of God, through the completed work of Jesus Christ.

“You have shown your care and thoughtfulness to many, not least your family, Earl, Carolyn and Luke, and to us, your friends.

“So today, it is our privilege to pray for you, as the Lord Jesus calls you to a deeper life of sacrificial service, calls you to consecrate yourself to Him, His Church and His cause.”’

Bishop Storey is married to the Rev Earl Storey — who gave the first reading during the service — and they have two adult children Luke (22), and Carolyn (25), and son-in-law Peter.

She grew up in Belfast and studied French and English at Trinity College, Dublin, before training at the Church of Ireland Theological College.

She was ordained a deacon in 1997 and a priest the following year, serving a curacy in Ballymena, a team vicar in Glenavy, and as a part-time youth worker co-ordinator.

Bishop Storey was rector of St Augustine’s in Derry since 2004 until her appointment was passed by the House of Bishops in September, four months after the Episcopal Electoral College had failed to elect a successor.

At the time she said she was “excited and daunted” by the historic appointment.

In Meath and Kildare she has taken over from Dr Richard Clarke, who was appointed Archbishop of Armagh and Primate of All Ireland last December.

Clergy present included the Bishops of the Church of Ireland and some retired Bishops and Archbishops as well as the Dean of St Patrick’s Cathedral Very Rev Victor Stacey.

Representing the Catholic Church were Bishop of Meath and Kildare Denis Nulty, while Msgr Dermot Farrell represented the Bishop of Meath Michael Smith. There too was the President of St Patrick’s College Maynooth Msgr Hugh Connolly, the parish priest of Maynooth Fr Liam Rigney , and Fr Kieran McDermot Episcopal Vicar for Evangelisation & Ecumenism in the Dublin Archdiocese.

Lockdown protesters may be traced using CCTV, Ministers told 22:02
Heritage sites and State buildings to turn green in run up to St Patrick’s Day 21:43
New assessment for children with disabilities not a ‘box-ticking exercise’, HSE official says 20:56
Maureen O’Hara statue ‘not a good likeness’ as refund given – FOI 20:43
Flooding ‘not an issue’ at most bog rewetting sites, committee told 20:32