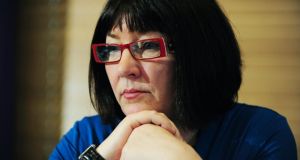 Maeve Lewis, executive director of One in Four: “Many of these young men began offending as adolescents by downloading internet images of children being abused and then moved on to sexually harming children themselves.” Photograph: Aidan Crawley

There has been a marked rise in the number of young sex offenders attending for treatment at the One in Four service, according to its 2013 annual report published today.

Executive Director Maeve Lewis said that in 2013 “the number of young men aged 18-25 years who have been referred to One in Four has increased and now comprises almost a quarter of all offenders on our treatment programme.

“Many of these young men began offending as adolescents by downloading internet images of children being abused and then moved on to sexually harming children themselves, said Ms Lewis.

“This poses serious questions for us as a digital age society in how we support young people to develop healthy notions of sex based on consensual sexual intimacy.”

In 2013 One in Four provided treatment to 30 sex offenders, working closely with the Child and Family Agency and the gardaí.

Ms Lewis said several of the young men among these 30 would have begun to abuse, usually in the family context, from ages 13 and 14.

They numbered about eight in 2013 but that figure was already 12 for 2014, she said. It had been four in 2012. As many as half in each year had themselves been abused.

She also noted that “by 2013 most of our clients had been abused in their own families and neighbourhoods, reflecting more accurately the reality of child sexual abuse in Ireland”.

The report noted that every survivor attending One in Four was the “victim of a serious sexual crime, yet fewer than 15 per cent chose to make a complaint to the gardaí.”

Ms Lewis said: “We have created a criminal justice system that so terrifies victims of sexual crime that most prefer to remain silent rather than seek justice for the terrible harm they have endured”.