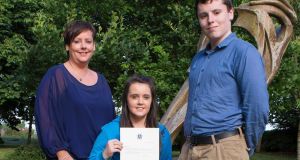 Nicole Kane with her Mum Marie and brother Adam and the letter she received from the Pope. Photograph: Thomas Nolan 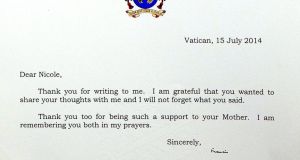 The letter that was sent to Nicole Kane from Pope Francis .Photograph: Thomas Nolan

Adam Kane (18) decided against sending a letter to Pope Francis with his mother, Marie, earlier this month. She was one of six abuse victims who met the pope in Rome on July 7th last.

Adam contented himself with decorating a letter from his sister, Nicole (14) and putting a seal on it instead.

He didn’t write himself as he felt “cynical”, he said. “I did believe the gesture [of the pope meeting his mother] was sincere but I honestly didn’t believe it would produce any real result.”

However, following reports of the meetings Francis had with his mother and the five other abuse survivors, he now believes the pope is sincere about the abuse issue “more so than his predecessor. It seems that way. I’d like to think so”.

Adam had “pieced together” the story of his mother’s abuse in his early teens, and was then “told the gist of it”.

She had been abused by a priest over a three-year period until she was 18. He felt “very much shocked” at first. “I had been a devout Catholic. It led me to doubt. I’m now an agnostic, disillusioned.”

Where his mother was concerned, he said: “I don’t see her very differently. If anything I respect her more.”

Prior to meeting Pope Francis, Marie Kane also wrote a letter, in case she might not remember all she wanted to say. She handed it and Nicole’s letter to the pope at the same time. He replied to both.

Today is the first time Ms Kane agreed to having her photograph published in connection with her recent visit to Rome. Her doing so now has been helped by Nicole posting a photograph of Pope Francis meeting her mother, on her Facebook page last Friday.