Human kindness and heroism shine out from North’s Kingsmill atrocity

‘I will never forget the horror, the heroism and human kindness ... in those terrible days’ 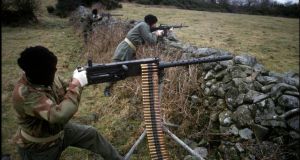 Republican paramilitaries training in a still from a propaganda video. The Kingsmill murders were carried out by a group calling itself the South Armagh Republican Action Force. Photograph: Getty Images

One of the worst days of my life as a journalist was when Roy Lilley, my editor on the Belfast Telegraph, asked me to cover the aftermath of one of the most awful atrocities of the Troubles.

It took place in 1976 near my native village of Bessbrook in south Armagh, and The Irish Times editorial stated the next day: “The headless coachman is driving Northern Ireland full tilt down the road to hell.”

On the night of January 5th, 12 mill-workers were ambushed at Kingsmill on their way home from work. They were lined up in the darkness, and asked “Who are the Catholics?” There was only one Catholic, and his 11 Protestant workmates who told him not to move. However when he did so, in panic, the assailants told him to run for it.

When he was clear of the group, they shot the 11 men in cold blood, and only one, Alan Black, survived.

The next day I travelled to my old home in Bessbrook, not far from Kingsmill, to report on the sequel. I travelled there with a heavy heart, for I had known some of the dead men.

One was Walter Chapman, an old school pal, known as “Chaps”. Another was Jimmy McWhirter, an obliging man who had driven my boy scouts troop in the local linen mill van to Belfast harbour on our way to a camp on the Isle of Man.

The night after Jimmy was murdered, I went to the wake in his house in Bessbrook. I met his widow, who remembered me from my boyhood days. She was dignified and courageous in her sorrow.

Later I met Danny Chapman, a decent big man who used to walk his greyhounds around the mixed-community housing estate where I had grown up. He had just identified his two nephews – Walter and Reggie Chapman – in the Newry hospital morgue.

He told me: “I cried before I went in. I expected the worst, and it was the worst. They pulled down the sheets, and there they were, lying, dead like dogs with their teeth showing. It was as awful as that. I saw mine lying dead, like dogs. You can print that in your paper.”

Several years later I talked to Alan Black, the sole survivor, who had made such a remarkable recovery. His Uncle John was married to my mother, Lena, and I had known him from my boyhood.

Alan took me to where the massacre had taken place. It was his first time there since the night of the shooting, and he noticed that someone had laid a wreath on the brow of a hill. He said, “That’s in the wrong place. I was lying at the bottom of that hill, where I could feel the trickling rain-water cooling my face.”

Alan told me how he had been taken to Daisy Hill hospital in Newry, and how the emergency surgical teams were waiting for him. Before he went into the operating theatre, the only hospital chaplain to get there in time was a priest, Fr Henry Devlin.

Alan said: “He asked me ‘Can I say a prayer?’ I replied ‘Father, I am a Protestant, but I could sure do with a prayer anyway.’ One of my hands was shattered, but he took my good hand in his and said a prayer over me.”

I will never forget the horror, and also the heroism and human kindness across the divides, in those terrible days. I hope and pray that they will never return.

Alf McCreary is an award-winning author and journalist who is a senior writer with the Belfast Telegraph. His memoir Behind the Headlines – 50 Years in Journalism is published by Colourpoint Books (£12.99/€16.40)