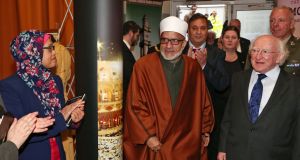 President Michael D Higgins with Imam Hussein Halawa during a visit to the Islamic Cultural Centre, Clonskeagh, Dublin to celebrate the 20th anniversary of the opening of the centre. Photograph: Colin Keegan/Collins Dublin

The Islamic Cultural Centre of Ireland in Dublin’s Clonskeagh has been congratulated by President Michael D Higgins for combating prejudice and misunderstanding, as well as promoting tolerance and acceptance.

At an event on Monday marking the centre’s 20th anniversary, he thanked the Muslim community there “for the important role you have played throughout those two decades in enabling Ireland’s Islamic community to become fully engaged, and active members of their wider social and national community.”

The Islamic community had played “its own important role in creating the great tapestry of multiple cultures that forms modern-day Ireland,” he said.

Noting how “our Muslim population has grown significantly in the past 20 years and today an estimated 65,000 Muslims call Ireland home,” he said “your community is a multidimensional one encompassing citizens from Pakistan, Nigeria, Malaysia, Algeria, Libya, Somalia, South Africa, Syria and Iraq who bring with them their own unique customs, culture, language and family traditions.”

Like so many others “who have arrived on our shores as strangers, but with minds open to the forging of new friendships and connections, your road has not always been an easy one,” he said.

In Ireland “we must ensure we create a landscape in which different cultural identities are enabled to exist in harmony, neither subservient to the other; one which encourages a respectful curiosity about different cultures and enables easy access to all points of entry to Irish culture,” he said.

It was Mr Higgins’s second visit to the centre where he opened a Celebration of Islamic Arts exhibition. It, he said, provided “an impressive overview of the great culture and heritage which so defines your community”.

It was important “in a world where advocates of a distorted and hateful version of Islam are persecuting those of other persuasions, first and foremost other Muslims, and seeking, in their fanatical fury, to destroy the cultural traces of previous civilisations,” he said.

Today, “at this particularly historic juncture, opportunities to encounter Islamic culture directly are an important tool in counteracting an increasingly wide-spread Islamophobia.”

This, he said, was “fuelled by an ignorance of the politics and history of the Middle East, ill-informed stereotyping, a blindness to the many ways in which our Muslim citizens and residents enrich our lives, and a misrepresentation of the tenets of the Islamic faith itself.”