Fr Seán Fagan a ‘brilliant thinker’ who was ‘broken’ by Rome 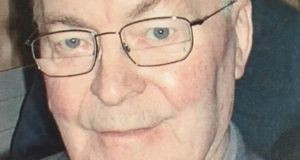 Fr Seán Fagan was widely admired and respected as a courageous theologian and compassionate pastor.

The late Fr Seán Fagan had his “heart and spirit” broken by the Vatican in the years before he died, former President of Ireland Mary McAleese has said.

“His long and illustrious priestly career was blighted in latter years by being silenced by the Congregation for the Doctrine of the Faith,” she said.

Widely admired and respected as a courageous theologian and compassionate pastor, he had been ill for some time.

For many years he was critical of rigid stances by the Vatican on issues of conscience and sexual morality, not least in letters to this newspaper.

In 2003, he published the book Does Morality Change? , for which he was censured by the Irish Catholic bishops in 2004, and in 2008 Whatever Happened to Sin?

He was first censured by Rome in 2008, and in 2010 was informed by the Congregation for the Doctrine of the Faith (CDF) that he would be laicised should he publish anything it considered contrary to Church teaching, and should he disclose this censure to media.

Then in 2012, he was one of five Irish priests silenced by the Vatican, including Fr Tony Flannery, Fr Gerard Moloney, Fr Brian D’Arcy and Fr Owen O’Sullivan.

In April 2014, Pope Francis had all sanctions against the very ill Fr Fagan lifted.

It later emerged that in December 2013, Ms McAleese had written directly to Pope Francis asking that he personally intervene in the case.

“A brilliant theologian and thinker who brought great distinction to Ireland, his long and illustrious priestly career was blighted in latter years by being silenced by the Congregation for the Doctrine of the Faith. His heart and spirit were broken but his fidelity to the Church and quiet acceptance of such an unjust fate won him even more admirers,” she said. “When, thanks to Pope Francis, the CDF finally restored him to good standing in 2014 it was a case of too little too late. A great and good man’s life and his life’s work had been ruined. Anyone wishing to comprehend the collapse of the Catholic intellectual tradition need only examine Seán Fagan’s tragic story.

“It reflects well on Seán and badly on those who hounded him using byzantine processes with no regard for due process or human rights. God grant him peace at last and may his legacy be an inspiration to restless inquiring minds who pursue justice and truth no matter what the personal cost. Seán was such a hero,” she said.

Fr Fagan’s remains will repose at Mount St Mary’s in Dublin’s Milltown on Sunday afternoon from 3pm until 6pm and all day on Monday prior to removal to the Church of Ss Columbanus and Gall at Milltown Rd, arriving at 5.30pm.

Funeral Mass on Tuesday morning will be at 11, followed by burial at the Marist community plot in Glasnevin cemetery.