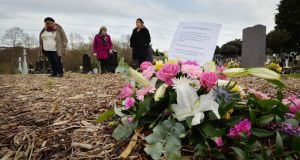 Members of the public are invited to visit graves of Magdalene women around Ireland on Sunday.

March 6th will mark the the fifth annual Flowers for Magdalenes event in all cities and towns where there were Magdalene laundries. The Justice for Magdalenes Research (JFMR) has called on people to visit Magdalene graves on the day and to place flower to honour the women who lived and died behind convent walls.

It is estimated that at least 1,663 former Magdalene women are buried in cemeteries across Ireland, many of them in unmarked graves. Flowers for Magdalenes is a family event and children are welcome.

On February 19th, 2013, Taoiseach Enda Kenny issued a formal state apology to women who had been in the laundries, describing the institutions as “the nation’s shame”.

He said: “I, as Taoiseach, on behalf of the State, the Government and our citizens deeply regret and apologise unreservedly to all those women for the hurt that was done to them, and for any stigma they suffered, as a result of the time they spent in a Magdalene laundry.”

It followed publication of an inter-departmental report on the laundries chaired by then Senator Martin McAleese, which found that more than 11,000 women had been in the 10 laundries operated in Ireland by four religious congregations since the foundation of the state in 1922.

In 1993, it was discovered that the remains of an additional 22 women were discovered when 133 bodies were being removed from a Magdalene laundry graveyard at High Park, Drumcondra, to allow its development for housing. All but one of the 155 bodies were then cremated at Glasnevin Cemetery.

Death certificates existed for only 75 of the initial 133 bodies, even though it is a criminal offence in this State to fail to register a death which occurs on one’s premises.

The 155 bodies were removed from the graveyard because the land was being sold by the Sisters of Our Lady of Charity to a property developer. They had been buried over the previous 100 years.