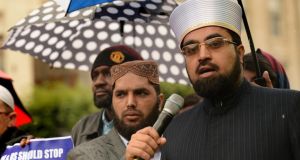 Dr Umar al-Qadri also called on Muslims in Ireland to adopt a strategy which would prevent radicalisation.

The “Not in Our Name” protest against Islamic State violence as a distortion of Islam was organised by the Irish Muslim Peace and Integration Council (IMPIC) and took place at the Spire on O’Connell Street in the rain.

It was the first such protest in Ireland and was attended by Muslim leaders from across the State. A document entitled Irish Muslim Declaration of Peace and Guide to Prevent Radicalisation was launched at the protest by Dr al-Qadri, who is the founder and chief executive of the IMPIC.

Among Muslims in Ireland “there is extremism, even if it is in a small percentage. Even among 50,000, if 100 Muslims support Isis it’s a big problem, it is a big issue. We as Muslims should not remain silent on that,” he said.

He said, “It tells us, Yes there is a small percentage, even though maybe it is only 100, but we as Muslims must condemn them and we must not remain silent . . . because these people are like an infection, are like a cancer.

He said that was why the Irish Muslim community has to have a strategy to prevent radicalisation.

The likelihood of widespread radicalisation in Ireland however is minimal, he said.

“If we as a Muslim community do not take a stand to end extremism and radicalisation, and have a strategy that will prevent radicalisation, then we may end up like the UK . . .

“That is our worry as Muslim leaders and that is also why we are having this protest,” he said.

Mosques and Islamic centres “that choose to remain silent [about radicalisation] are, we believe, responsible for extremism among the minority of Muslims in Ireland,” he said.

Irish people “are among the friendliest people I have met in my life . . . but, having said so, it is our duty to ensure that they remain friendly,” he said.

That is why “we must be pro-active in this,” he said.