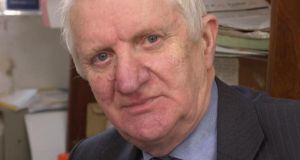 Dr Cyril Daly: wrote an open letter to the then archbishop of Dublin, John Charles McQuaid, describing Catholic education as “offensive” to Christ’s teaching and “corrupt . . . in its infliction of violence”. Photograph: Bryan O’Brien.

Dublin doctor Cyril Daly died in August at the age of 82. He was buried in St Fintan’s Cemetery in Sutton, but his true memorial occurred this week in a little-noticed vote in the Dáil.

On Wednesday, TDs passed an amendment to the Children First Bill, removing a “reasonable chastisement” provision from Irish law, which allowed parents and carers to punish children physically in certain circumstances.

The Dáil vote was little noticed because the world has moved on. But it was not always thus. In 1967, Daly, a Killester GP, was widely criticised, by the Irish National Teachers Organisation, among others, when he began his campaign to ban the birch.

It started when one of his sons told him he had seen another boy being badly beaten by a teacher at school. Daly told the principal he did not want his children attending a school where such punishment was allowed.

Daly was told to remove his three sons. He home-schooled the boys for a time before enrolling them at the non-denominational Sandford Park School in Dublin.

A devout Catholic, he wrote an open letter to the then archbishop of Dublin, John Charles McQuaid, describing Catholic education as “offensive to His [Christ’s] teaching” and “corrupt . . . in its infliction of violence”.

In 1969 he sent a petition signed by 8,000 people to Lenihan, pointing out that “the Irish child is a human being, with human rights”. He sent letters to then papal nuncio, archbishop Gaetano Alibrandi, criticising the regime of physical punishment in Catholic schools and “its propensity to induce psycho-sexual deviation from the norm”.

Physical abuse, Daly said, was then standard in only two callings, prostitution and teaching. In a letter to this newspaper, he wrote that “in any class of 40 children, seven or eight would be in need of remedial education” and these were the ones most likely to be physically punished.

The result, Daly wrote, was an emotionally retarded child “quite unfit to meet the exigencies of life”.

The doctor’s campaign, supported by others over time, saw corporal punishment banned in schools in 1982.

Last May, the Council of Europe ruled that the lack of a clear ban on smacking children in Ireland violated their rights, leading Minister for Children Dr James Reilly to promise action.

The law states that it is an offence “for any person who has the custody, charge or care of a child wilfully to assault, ill- treat, neglect, abandon or expose the child, or cause or procure or allow the child to be assaulted, ill-treated, neglected, abandoned or exposed, in a manner likely to cause unnecessary suffering or injury to the child’s health or seriously to affect his or her wellbeing”.

However, when it came to corporal punishment in the home, a defence of “reasonable chastisement” was allowed to remain in common law.

Today, 46 countries completely ban corporal punishment, including 20 of the 28 EU states. Ireland is now one of them.

Reilly introduced the amendment, co-sponsored by Senator Jillian van Turnhout, to the Children First Bill in the Seanad last month. Van Turnhout said it was “shameful we have not yet dealt with this issue. Just 100 years ago, people could beat their wives, their dogs and their children. We still allow the beating of children. This says a lot about our society.”

The Children’s Rights Alliance, an umbrella group of more than 100 organisations, had urged the Government to outlaw “violence against children” and to strengthen positive parenting support programmes.

Responding to the Dáil decision, Tanya Ward, chief executive of the Children’s Rights Alliance, said it signalled “momentous” change. “Children will now be safer and better protected,” she said.