Dáil, Seanad refuse to have Hindu prayer at opening sessions 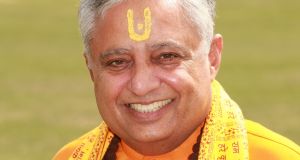 President of the Universal Society of Hinduism, Rajan Zed, said the “Oireachtas should realise that we were in 21st century now and re-evaluate the matrix of opening prayers by revising the standing orders of Dáil and Seanad”.

The Dáil and Seanad have rejected requests that a Hindu prayer be read at the opening session of debate in each chamber.

Expressing his disappointment at this, president of the Universal Society of Hinduism, Rajan Zed, told The Irish Times the “Oireachtas should realise that we were in 21st century now and re-evaluate the matrix of opening prayers by revising the standing orders of Dáil and Seanad, so that prayers of other religions could be read by invited diverse religious leaders”.

Based in Nevada, he urged the Ceann Comhairle Seán Ó Fearghaíl and the Cathaoirleach of the Seanad Denis O’Donovan “to relook into their stand and allow the Hindu invocation at least one time at the beginning of their sitting”.

He called on President Michael D Higgins and Catholic primate Archbishop Eamon Martin to intervene and is considering an approach to the EU as well as the Council of Europe and its Commissioner for Human Rights “to persuade Oireachtas for a more inclusive opening prayer”, he said.

Mr Zed has read opening prayers in the US Senate and its House of Representatives in Washington, as well as at various State senates and assemblies across the US.

He pointed out that Ireland was “a diverse society now” and “ a parliamentary democracy like Ireland should be a representative body of all its citizens, including the minorities”.

A letter he received on behalf of the Ceann Comhairle said Mr Zed’s offer “to read a Hindu prayer at the opening of a Dáil sitting is not something which can be facilitated at this time”, while one on behalf of the Cathaoirleach of the Seanad expressed regret that he was not in a position to accede to the request.

The prayer, in Sanskrit, the sacred language of Hinduism, starts and ends with “Om”, described as “the mystical syllable containing the universe”.

“We meditate on the transcendental glory of the Deity Supreme, who is inside the heart of the Earth, inside the life of the sky and inside the soul of the heaven. May He stimulate and illuminate our minds.”

Hinduism is the oldest and third largest religion in the world and has an estimated one billion adherents.

According to the 2011 census there were 10,688 Hindus in Ireland. Figures from last year’s census are not yet available.