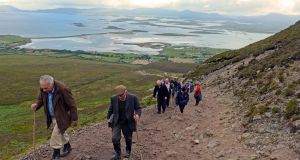 Gardaí will be stopping people from climbin Croagh Patrick on Reek Sunday with the pilgrimage cancelled due to the coronavirus pandemic. Photgraph: Eric Luke/The Irish Times

Groups closely involved with organising the annual Reek Sunday climb of Croagh Patrick in Co Mayo have appealed to people to stay away next Sunday for reasons relating to Covid-19. The pilgrimage traditionally takes place on the last Sunday of July each year.

In a statement they said that: “following wide ranging consultation with all of the partners in Reek Sunday” as well as the gardaí and Mayo County Council, “it became clear immediately that we would not be logistically in a position to proceed with Reek Sunday this year.”

They said that: “many of the volunteer stewards who know the terrain and the routine are themselves cocooning. The logistics of members of the public or volunteer emergency services coming to the assistance of someone who had fallen would create unnecessary public health risk.

“It was furthermore confirmed to us by a consultant in public health medicine that Reek Sunday fell outside the criteria laid out in the roadmap for reopening the country. The public health advice is clear and we absolutely abide by it.”

The organisers pleaded that their decision be respected “both for the sake of our community, who support us so much, and in the national interest.”

They noted how this did not happpen in 2015 when the Reek Sunday climb was called off due to an overnight storm and the destruction of infrastructure, yet “people still climbed putting themselves and others at risk.”

They said, “gardaí will be on duty on all approaches to Croagh Patrick this year, and in order to protect us all, will be actively promoting and enforcing current Public Health guidelines.”

The statement has been issued by the Reek Sunday Organising Forum which includes the Croagh Patrick Stakeholders Group, the gardaí in Westport, Mayo County Council, Mayo Mountain Rescue, the Order Of Malta, Westport, Murrisk Development Association, and St Mary’s Catholic parish in Westport.

St Mary’s administrator Fr Charlie McDonnell said that, despite the absence of infrastructure at the mountain and the season being closed for 2020, people were still turning up to climb it with as many as 1,394 there on the weekend of July 12th this year. Similar crowds were there last weekend, he said.

However Archbishop of Tuam Michael Neary will still celebrate the annual Reek vigil Mass at St Mary’s in Westport on Saturday July 25th at 6:30 pm. It will be offered for the intentions of all who had wished to make the pilgrimage to Croagh Patrick’s summit.

Prayer intentions can be emailed to reeksunday2020@gmail.com or by post to Westport Parish, Co Mayo. Saturday’s Mass will be live-streamed on the parish Facebook page ‘St Marys Church Westport’, which can be accessed on www.westportparish.ie