Publishing titles included ‘The Glenstal Book of Prayer’ which sold over 150,000 copies 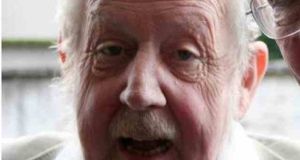 An Armagh man, in 1984 he founded Columba Press in Dublin as an independent religious book publisher with a mission to produce “thoughtful books for a thinking church”.

Its first three titles were published in 1985 and he was credited with publising over 2,000 books in the following years, at a rate of 35 new titles a year at its height.

Those first three books were Masses with Young People by Donal Neary SJ, Funeral Homilies edited by Liam Swords, and Disturbing the Peace by Eamonn Bredin. Among its authors was former president Mary McAleese.

In 2001 it enjoyed particular success with The Glenstal Book of Prayer which sold over 150,000 copies worldwide and topped the bestsellers list in Ireland for 18 weeks. In 2004 the Book of Common Prayer for the Church of Ireland, in its various editions, sold over 120,000 copies.

The company publishes across a broad range of areas, including pastoral resources, spirituality, theology, the arts, and history. A secular offshoot of Columba Press, Currach Press, publishes secular non-fiction titles.

In a tribute to Sean O’Boyle and Columba Press last year one of its authors Betty Maher wrote in these pages of “the unique contribution the Columba Press made in discussions relating to church, morality and religion over three decades. It published authors as it saw fit, seeking no imprimaturs from anyone” and “at a time when virtually all other avenues were closed to them”.

She recalled in particular the publisher’s “hospitality to women writers” through which “many women found their voices”. Following “the acute disappointment felt by many at the lack of renewal in the church after Vatican II, to which so many had contributed willingly and generously of their time, energy and financial resources, Columba was a lifeline.”

Mr O’Boyle is survived by his wife Monica and children Eimear, Laoise, Máire and Fearghal.

His funeral Mass takes place next Wednesday, December 27th, at 11.30 am in the Church of St Laurence O’Toole, Kilmacud, with cremation afterwards at Mount Jerome.

1 Life under Level 5: Where can I go, who can I see, what is closed and what is open?
2 One hundred Irish retailers for all your online Christmas shopping
3 Thousands of gardaí mount checkpoints and patrol parks, beauty spots
4 Covid-19: Pressure over breakdown in tracing system intensifies as State enters Level 5
5 Nearly 400 Brazilians have tested positive for Covid-19 in Ireland, data shows
Real news has value SUBSCRIBE