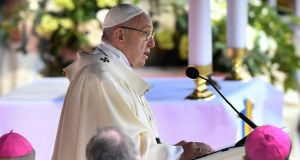 A group representing lay Catholics in Ireland has called for women priests in the church, and for all its priests be allowed marry.

They also “insist” that the bishops make their views known to Pope Francis as “this is the only way that change will ever come to be in our Church.”

Aligning themselves with calls by the Catholic Church Reform International group, the Association of Catholics in Ireland (ACI) said that “along with Pope Francis, reformers recognise that in the current teaching of the Church, the Magisterium is without authority to ordain women”.

This was due to Pope John Paul’s apostolic letter of 1994, which they described as “an impediment to full removal of gender discrimination from priestly ministry”.

However, they noted that “the Biblical Commission appointed in 1976, by Pope Paul VI, found nothing in the New Testament which prohibits the ordination of women”.

They advocate for “evolution of the organisation and function of ministries within the Church and for access to these ministries without regard to gender”.

Pope Francis was “opening up a path for the Spirit by being first and foremost a pastor, repeatedly inviting the people to speak up, to share their sense of the Spirit with their pastors, and have their bishops bring those heartfelt desires to him.

“Through this process of encounter and accompaniment, dialogue and discernment, the Church will address the needs of our times and become more fully aligned with the Spirit of Christ,” they said.

They felt that “Pope Francis has decided not to rock the conservative boat on the issue of women’s ordination. Yet he is taking steps covertly in that direction. These include the inclusion of women in the Maundy Thursday washing of the feet liturgy; calling for a study of women deacons; and in several ways encouraging women to take their place among the people of God and exercise their baptismal call to a common priesthood”.

It was also the case that, in Sweden last week, Pope Francis “openly greeted Antje Jackelén, the female Lutheran Archbishop of Uppsala, during an ecumenical service in Lund at the occasion commemorating 500th anniversary of the Reformation. And earlier this year, Francis elevated the memorial of St Mary Magdalene to the Feast of Mary Magdalene to be at the same level with her male colleague-Apostles”.

The ACI also drew attention to a new website ThePeopleSpeakOut.org. where laity can “explore the kind of Church needed for our times”.