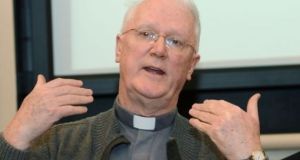 Fr Brendan Hoban was commenting on recent remarks by the Archbishop of Dublin Diarmuid Martin bemoaning the dearth of Catholic intellectuals in Ireland.

Catholicism in Ireland is being abandoned to obsessive extremists and a religious media more anxious to protect its pockets than engage with realities of faith in the world, a leading priest has said.

“If bishops or priests or intelligent ‘lay’ Catholics are not prepared to reflectively engage in the public market-place then that space is left open to obsessive Catholic extremists who seek to psychologically bludgeon anyone who doesn’t agree with them – and do untold damage to the Catholic faith in Ireland – and to religious media who often seem more anxious to protect their pockets than to engage with the realities of faith in the world,” said Fr Brendan Hoban.

Co-founder of the Association of Catholic Priests, Fr Hoban was commenting on recent remarks by the Archbishop of Dublin Diarmuid Martin bemoaning the dearth of Catholic intellectuals in Ireland.

“Diarmuid Martin has pointed us in the right direction,” Fr Hoban said, but “the difficult truth is that there is little institutional support for intellectual debate in the Catholic Church – as distinct from cheer-leaders”.

He said: “For example, there is little or no respect for theologians in the upper reaches of the Irish Church, by which I mean theologians of the calibre of Enda McDonagh, Gabriel Daly, Sean Fagan, Vincent McNamara and others rather than those others of whom great things were expected but who now seem often to use every opportunity to ingratiate themselves with church authorities, with an eye to promotion.”

The five Irish priests silenced by the Vatican were, he said,“sacrificial lambs hunted down by the Catholic ‘stasi’, the equivalent of the East German secret police, who wouldn’t know their theological arm from their elbow.”

That some of the priests “were just effectively helping to explain in ordinary words the insights of theologians and biblical scholars and were ‘silenced’ because of it is an embarrassment beyond words,” he said.

In his Western People column, Fr Hoban said “it’s more than a source of frustration to hear Catholic education being praised to the skies and then to consider the question: Is there one Catholic intellectual in Ireland, the recipient of a huge personal and institutional investment in Catholic education, who’s able and willing to engage with faith questions in the market-place? I can’t think of one, I have to confess.”