Healing for Smyth abuse victims cannot begin until then, it is claimed 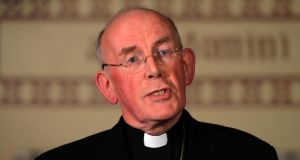 The sole clerical abuse survivor on the Vatican’s new Commission for the Protection of Minors, Marie Collins, says she hopes Catholic Primate Cardinal Seán Brady’s letter of resignation is accepted by Pope Francis without delay.

Speaking to The Irish Times last night, she said this should happen “as soon as possible”, and “there should be no reason for a delay”.

Cardinal Brady, who is 75 today, confirmed yesterday he offered his resignation as Archbishop of Armagh to Pope Francis last month, in anticipation of his 75th birthday.

This is required of all Catholic bishops under canon law on reaching that age.

The cardinal also said he looked forward to “the day when my resignation will be accepted”.

He is a cardinal for life and may take part in papal elections until he is 80.

Ms Collins said last night she told the cardinal he should resign face-to-face at a meeting in Armagh in March 2010 following revelations of his role in a 1975 inquiry in which then 14-year-old Brendan Boland was sworn to secrecy concerning his abuse by Fr Brendan Smyth.

The teenager also provided the inquiry with the names of five more young people he believed were being abused by Smyth.

None of their parents were informed, nor were police on either side of the Border. Smyth continued to abuse children for a further 18 years.

At her meeting with Pope Francis on July 7th, Irish abuse survivor Marie Kane said Cardinal Brady had to go.

This sentiment was repeated by the other Irish abuse survivor who met Pope Francis that day, Mark Vincent Healy, in this newspaper last week.

It was also made by Brendan Boland himself in an interview with The Irish Times last month to coincide with publication of his book Sworn to Secrecy.

He said that to allow Cardinal Brady “retire naturally as if he did nothing wrong” would amount to “part of the cover-up” of his role in the Smyth saga.

It is believed in church circles that Cardinal Brady wanted to resign in 2010 but was persuaded to hold the line by Rome, lest his resignation precipitate that of other senior church figures with questions over their handling of the abuse issue.

He did not attend the state banquet at Windsor Castle last April hosted by Queen Elizabeth to mark the official visit to the UK by President Michael D Higgins.

He had already arranged to meet Armagh priests, he said.

Generally, Rome moves slowly when it comes to accepting letters of resignation from bishops.

It delayed four years before accepting that of Cardinal Brady’s predecessor cardinal Cahal Daly in October 1996, when he was 79.

It delayed three years before accepting the resignation of Cardinal Desmond Connell as archbishop of Dublin in April 2004, when he was 78.

The current Bishop of Clonfert John Kirby was 75 last October and remains in situ, as does Archbishop of Cashel Dermot Clifford, who was 75 last January.

It was accepted with alacrity (by Rome’s standards) five months later in May 2010.

This may have been related to bishop Walsh’s calls for discussion in the church on women priests, mandatory celibacy, its attitude to homosexuality, the refusal of Communion to remarried Catholics, his lack of enthusiasm for the Latin Mass, and his expressed wish to see another pope John XXIII.

Were he to have reached 75 this year, it is likely his letter of resignation would gather dust in Rome for some years to come.