Archbishop orders Dublin gangland funerals to be toned down 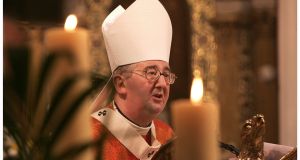 Archbishop of Dublin Diarmuid Martin says he does not want any more ‘show funerals’ in Dublin for those linked to gangland crime. Photograph: The Irish Times/Dara Mac Dónaill

Archbishop of Dublin Diarmuid Martin has ordered funerals for gangland criminals at Catholic churches in the capital be toned down.

He said this morning “where it can be ascertained that individuals hold direct responsibility in this traffic in evil, they will no longer be allowed to exploit religious services in the Archdiocese of Dublin to enhance their image.”

Speaking to The Irish Times at the Pro Cathedral he said “no more show funerals. Everybody has a right to be buried, funerals are for the bereaved as well, but when funerals become symbols which glorify, we have to insist that they be very simple.”

Those “who really belong to, those who manage this culture they can go elsewhere.”

They could go to “other churches. There are civil funerals all over the place. If they want that sort of thing, they go there. We will continue to have prayerful services, remembering those who died. But that’s it.”

Dublin has “a problem with celebrity funerals, all over the place, which are getting out of hand. We have to go back to the simplicity of what a Christian funeral is about and those who come for Christian burial will be buried according to the rites of the Church. But, no shows,” he said.

Earlier, in a strongly-worded statement at the end of a Mass in the Pro Cathedral to mark the feast of St Kevin, he said “on many recent occasions, I have expressed my concern and horror at the level of violence that has affected life in Dublin in recent years. I have spoken about the tragedy of knife violence especially among young people. I have spoken about violence fostered by the revolting business of death of the drug cartels.

“In the past weeks, this violence has taken on an unprecedented level of depravity with shootings taking place unscrupulously near schools and shopping centres, leaving families terrified and children witnessing brutality that will leave scars on their lives for years.

“Who are the people who carry out and sponsor such violence? Where do they think they have a mandate to carry out such shameful violence simply in order to secure their own wealth?

“The perpetrators and sponsors of such violence merit nothing but rejection and distain. They belong behind bars and their business of death must be undermined and destroyed.

He appealed “to anyone who can provide information about this sickening underworld to have the courage and the decency to come forward in the interest of all. I appeal to civil and community leaders to show a united and uncompromising response. I urge people to approach the gardaí either directly or indirectly to provide any information which can help remove this malignance from our streets.”

He was closely associated with friends Seán Little (22) and Jordan Davis (22) shot dead the previous week as well as Zach Parker (23) who was shot dead in January.

All four men were linked to a drug gang based in Finglas, north Dublin, and it is possible members of the gang were responsible for all four murders.

The surge in city violence comes at a time when the Kinahan-Hutch feud is ongoing.

Another feud in Drogheda, Co Louth, has seen three men left with life-changing injuries after efforts to kill them were botched. And there are two other criminal feuds, in the Dublin suburbs of Finglas and Mulhuddart, between rival factions in each.