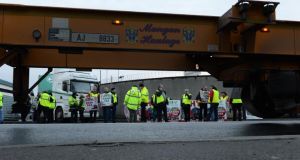 Hauliers protest outside Dublin Port this morning over what they claim are high taxes on the sector. Photograph: Dara Mac Dónaill/The Irish Times 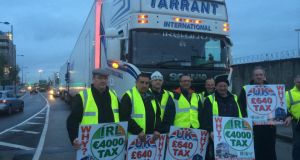 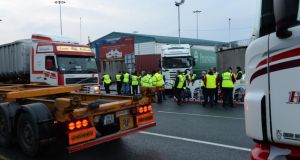 Hauliers protest outside Dublin Port this morning over what they claim are high taxes on the sector. Photograph: Dara Mac Dónaill/The Irish Times

Traffic was severely disrupted around Dublin’s East Wall and the Dublin Port Tunnel this morning due to a tax protest by lorry drivers.

The drivers blocked the southbound tunnel with lorries at about 6am, but these were moved shortly after 8.30am and the tunnel has reopened.

The East Wall road inbound has also reopened after being blocked earlier. Traffic in the area is now moving but remains congested.

Gardaí were still advising motorists to use alternative routes.

Members of the Irish Road Haulage Association claim up to 3,500 Irish-registered lorries are likely to re-register outside the State by Christmas due to the high cost of operating here compared to Northern Ireland.

Already the hauliers claim up to 1,500 heavy goods vehicles, out of a national fleet of some 22,000, have been re-registered outside the State, particularly in Northern Ireland, over the last 18 months.

There is no similar charge on foreign lorries operating in the Republic.

As a result some 50,000 jobs in the industry in the South are under threat, the hauliers claim.

Hauliers said they were disappointed the recent Budget did not address the situation, even though the Government had privately acknowledged the situation.