President Higgins to travel to Belgium for official war commemorations 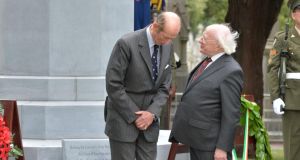 President Michael D Higgins and Duke of Kent, president of the Commonwealth War Graves Commission, after unveiling a Cross of Sacrifice at Glasnevin Cemetery on Thursday. Photograph: Alan Betson

President Michael D Higgins will represent Ireland at events on Monday in Belgium to mark the 100th anniversary of the start of the first World War.

Both commemorations will be attended by representatives from all the countries involved on the Western Front. The British official commemoration will be hosted by Prince William on behalf of Queen Elizabeth II. Some 27 soldiers who served in Irish regiments are buried in St Symphorien Military Cemetery.

The Royal Irish Regiment – which was mostly drawn from soldiers in the southeast – suffered 300 casualties at the Battle of Mons, which was the first engagement of the British army in the war.

It includes the grave of Lieutenant Maurice Dease from Coole, Co Westmeath, the first winner of the Victoria Cross in the war. He was killed at Mons on August 23rd, 1914.

His nephew Maurice French and grand-nephew Patrick French, a journalist and author, will be attending the service along with 500 others.

The centenary of the outbreak of the war will be officially commemorated with a memorial Mass tomorrow at 11am in the Pro-Cathedral, Marlborough Street, Dublin, to be celebrated by Archbishop Diarmuid Martin.

The Government will be represented at the Mass by Minister for Foreign Affairs Charlie Flanagan.

Representatives of the Organisation of National Ex-Servicemen, the Royal British Legion Ireland, and others will attend and display their standards.

Ireland will be represented at commemorations to take place in Glasgow on Monday by Minister for Arts Heather Humphreys, who has responsibility for the Decade of Centenaries.

Ms Humphreys will then travel to Belfast for a number of commemorative ceremonies, including a service of solemn commemoration which will be held at St Anne’s Cathedral.

At 11pm on Monday, to mark the exact moment when Britain declared war on Germany, a candlelight vigil will be held at Westminster Abbey and other locations across Britain.

The Abbey will move from light into darkness echoing the British foreign secretary Sir Edward Grey’s famous remark that “the lights are going out all over Europe, we will not see them lit again in our lifetime”.

A service of commemoration of the lives of the 35 Bellewstown soldiers who fought in the war takes place on Monday at the Memorial Cenotaph in Mary Street, Drogheda at 11am. The Bellewstown Heritage Group has been working on this project for eight months.

The Irish Anti-War Movement (IAWM) will host an event on Tuesday morning marking the release of a pamphlet entitled World War 1: What did they die for?

The movement says it is “vitally important” to remember the Irish soldiers who died, but no attempt should be made to suggest it was anything other than an “imperial slaughter”.