‘One of the greats’: Comedian Brendan Grace dies aged 68 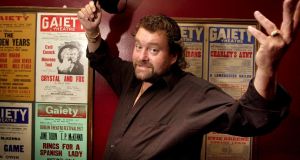 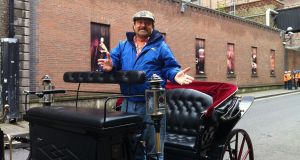 Born in the Liberties area of Dublin, Brendan Grace worked in the entertainment industry for 50 years. 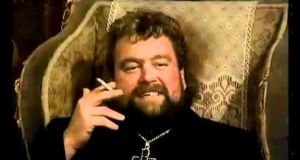 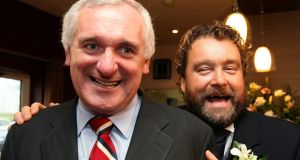 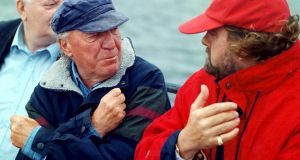 Former taoiseach Charles Haughey tellsBrendan Grace to wrap up warm against the inclement weather as they set off to start the annual Dingle Regatta. Photograph: Don MacMonagle

A book of condolence will be opened on Thursday afternoon and Friday for Dubliners to pay their respects to comedian Brendan Grace, who has died aged 68.

Grace had been in hospital receiving treatment for pneumonia when he was diagnosed with lung cancer.

He had been in hospital for the last month.

President Michael D Higgins led the tributes to Grace saying: “Brendan’s spontaneous wit and his sense of timing, his obvious delighting in interaction with his audiences, meant that Brendan’s sense of humour was drawing from, and itself a profound contribution to, the deep wellspring of Irish wit.

“I express my deepest condolences to his wife Eileen, his children Bradley, Melanie, Brendan and Amanda, and to his wider family and his friends, and all who valued his acuity and sharp sense of humour.”

Taoiseach Leo Varadkar paid tribute on Twitter, writing: “RIP Brendan Grace, an Irish comedy legend. You made us laugh so many times, from Bottler to Father Ted and so many others. One of the greats. Our thoughts are with Brendan’s friends and family.”

Lord Mayor of Dublin Paul McAuliffe will open the book of condolence at the Mansion House at noon on Thursday. It will remain open until 5pm and from 10am-5pm on Friday.

“Brendan Grace was a true Dubliner who captured the unique Dublin sense of humour and brought it to audiences at home and across the world,” said Mr McAuliffe.

Grace began his career in music before turning to comedy and is probably best known for his role as the deeply unlikeable Fr Fintan Stack in Father Ted.

Born in the Liberties area of Dublin, Grace worked in the entertainment industry for 50 years.

He lived in Florida in the US and regularly returned to Ireland to tour but was forced to cancel his Irish tour this summer due to ill health.

He is survived by his wife of 46 years, Eileen, and their four children.

He has had a number of health issues in recent years and suffered a stroke and complications from diabetes.

Comedian Brendan O’Carroll said Grace occupied a niche in Irish comedy that no one can fill. “He never failed to make me laugh,” O’Carroll told Ryan Tubridy on RTÉ Radio 1. “An amazing all rounder and a very very generous man with his time, and with his advice.”

“While there are now many Irish comedians who are household names, Brendan emerged as a talent during an era when there were very few established Irish comedians.

“Through his live shows, his live recordings, The Brendan Grace Show and many memorable guest appearances on RTÉ’s The Late Late Show, Brendan established himself in the hearts of generations of fans, not just in Ireland, but all over the world.

“Importantly, he also paved the way for many of the wonderful comedians this country has produced over the last twenty years or so and leaves behind a legacy he and his family can be proud of.”