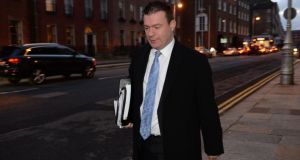 to stabilise the private rented sector, the National Economic and Social Council has said.

In an unpublished document, the council says security of tenure is of “fundamental importance. . . not only for individual tenants but also in underpinning long-run stable demand for rental accommodation...International experience suggests that some forms of rent control in the right conditions are effective.”

It also says strong tenancy security “has to be coupled with effective eviction procedures as landlords have to be sure that they can evict tenants that do not fulfil their contractual obligations”.

The document, The Private Rented Sector: An Initial Discussion of Perspectives and Issues, will be discussed at Dublin City Council’s housing committee tomorrow.

It comes days after a policy document from the youth organisation We’re Not Leaving also called for rent controls, but a month after two reports from the Private Residential Tenancies Board and the Housing Agency which said rent controls could make matters worse. Carried out by DKM consultants, the reports had been commissioned by former minister for housing Jan O’Sullivan.

The NESC, however, says a stable sector, with strong tenancy security, would be attractive to landlords “because it creates the long-term demand for rental housing”.

Spiralling rents in the private rented sector, particularly in Dublin, are causing concern. Almost 50 families a month are presenting to homelessness services in the capital compared with about eight monthly last year. Dublin rents have increased 14 per cent in the past year, while elsewhere they have risen 11 per cent. One regime

The NESC, however, describes some of DKM’s methods of calculation, as well as their underlying assumptions and conclusions, as “perhaps surprising”, “not obvious[ly] well based”, “most surprising” and “very unusual”.

The council says the DKM analysis of one model does not allow for a possible fall in rent when new leases are being negotiated, while in the consultants’ analysis of another they fail to take into account “a number of factors that moderate the rise in rents in this scenario”.

The NESC added that economists had long been opposed to rent control. “The essential concern of economists is that holding rent below the market level undermines the supply and quality of rental accommodation. This was a central consideration in DKM’s conclusion that the introduction of rent control would not be a good idea in Ireland. ”

Minister for the Environment Alan Kelly has indicated he favours increasing housing supply rather than rent controls.