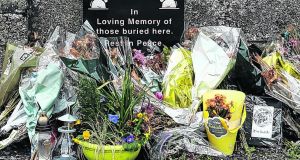 Minister for Children Katherine Zappone has been criticised for casting a slur on people in Tuam through her accusation that there were persons who knew more about what happened to babies in the mother and baby home than they were sharing.

There was a mix of anger and disappointment in the town following the publication of the fifth report by the Commission of Investigation of the Mother and Baby Homes, which stated there were people in Tuam who know more about burial arrangements made.

Cllr Donagh Killilea (FF) said the story was “still raw with many people”, but that “it is shameful of the Minister to suggest that people are not coming forward with information. The people she should be talking to are those involved in the construction of houses in and around the burial ground and engineers who worked in Galway County Council.

“My grandfather (the late Deputy Mark Killilea) who was on the County Health Board at the time asked questions and was instrumental in getting the home closed down in 1961.

‘The homes were wrong’

“No doubt what went on in the home was wrong, the homes were wrong, but people had no alternative at the time. But this suggestion by the Minister and the Commission is a slur on the people of Tuam.”

PJ Haverty from Menlough, who was in the home until he was aged seven, said he did not understand why the Minister made the statement.

“I think Minister Zappone is fantastic and that we wouldn’t have come this far with this without her, but I don’t understand why she said what she said.

“I hadn’t a clue about what happened to babies in the home when they died and never heard anything about any of them being sold to America. There would be very few alive now who would know, if they knew anything. Some nuns, we know now, were taken from a burial ground there and reinterred in Knock, but none of the babies.

“All I know is that the nuns wouldn’t open the door to my mother for five and a half years while she tried to get me, her own son, out of the home.

“To this day I haven’t met any of the nuns, nor have had an apology for what happened to me or my mother.”

Teresa Kileen Kelly, a member of the Tuam Home Graveyard Committee which has looked after the burial site, said: “It’s hard to say if local people are angry or disappointed, but I know for sure that people would like it concluded once and for all. . . but I don’t think there is a solution that will make everyone happy.”

She said if anyone knew anything it was the county council, which built a housing estate around the burial ground and not over it.

She said she believed most people would not have known whether babies had been buried in a septic tank, and that in hindsight it sounded corrupt if they had known.

“You can’t put today’s eyes on the past, a time when women went to England or into a mother and baby home to have babies. Either way, nobody wanted them at home. That’s how it was.”

Many people in the town are annoyed over the negative media attention the town has attracted over the issue. One woman, who did not wish to be named, said it was all innuendo and that the Minister’s latest comments about a cover-up were not going to help. “It’s disappointing having the finger pointed at us again,” she added.

Another man said there had been a culture of secrecy and that many who might have known how babies from the home were buried were long dead themselves.

Some people know more about the burial of children at the mother and baby home in Tuam than was provided to a Government investigation, the Minister had said. On Wednesday, Ms Zappone published the fifth interim report by the Commission of Investigation of the Mother and Baby Homes.

On the belief people may not have provided information to the commission, Ms Zappone said: “They effectively believe that there must be people in Tuam that know more about burial arrangements. There is still more information out there and they would like to know.”