What DNA analysis can achieve in identifying Tuam remains 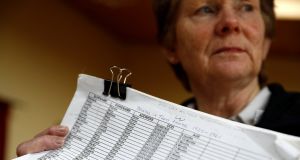 Historian Catherine Corless holds a list of names of missing children from the mother-and-baby home run by the Bon Secours nuns in Tuam. File photograph: Reuters

Latest DNA extraction and analysis techniques enable genetic profiles of remains that are thousands of years old to be identified. Vast amounts of genetic data can be analysed quickly, while the technology is relatively inexpensive compared to previous options.

A technical group established by Minister for Children Katherine Zappone cast doubts on hopes that DNA testing could identify remains on the grounds of the former Bons Secours home in Tuam. But a team of scientists from UCD and TCD challenged the report after it was published in December 2017.

In a submission to Government they outlined how they had successfully identified whole genetic profiles of remains thousands of years old. This had also been achieved with infant remains, which were smaller and posed particular difficulties.

The UCD-TCD team – experts in genomics and DNA databanks – argued that the technical group analysis was “viewed through the prism of a technology that is at least 20 years old”. They said this technology is traditionally used to build DNA banks for use in criminal cases. Moreover, they added that the focus solely on traditional DNA analysis which identifies short repeating sequences known as short tandem repeats as the only means to confirm identity was surprising.

The UCD-TCD team said the group appeared to ignore the potential of using more advanced technology. This includes high throughput sequencing coupled with identification of single nucleotide polymorphisms – the most common type of genetic variation in people – to analyse degraded DNA.

The mapping of the complete genetic make-up of a human was first completed in 2003 and transformed the ability of scientists to retrieve DNA from archaeological material. Rapid advances in genetic technologies since have enhanced the ability to identify remains.

Prof Dan Bradley of TCD and Prof David MacHugh of UCD, who contributed to the submission, pioneered the study of ancient DNA in Ireland when two decades ago they used bones excavated at the Wood Quay Viking settlement in Dublin.

They have since continued to work in paleogenomic to retrieve complete genome sequences and reconstruct ancient population movements using archaeological material. They use these techniques with vast data banks to determine genetic relatedness at a relatively low cost. In their submission, they proposed taking small samples from the petrous bone in the lower skull as the best course to identify the remains in Tuam, beginning with a pilot study of samples from 20 juvenile skulls.

The UCD-TCD team accepted DNA degradation is a serious issue for traditional and new analysis methods and depends on factors including age, environment, source of DNA and extraction method.

Prof MacHugh expressed confidence that difficulties in Tuam could be overcome, especially if remains were in walled chambers, which could have helped their preservation.

The technical group had contended “co-mingled” remains at one location made identification “particularly challenging”. There was a “risk of destruction to human remains” that raised ethical issues while “testing skeletal remains is time consuming and technically difficult as specialist DNA extraction techniques have to be applied”.