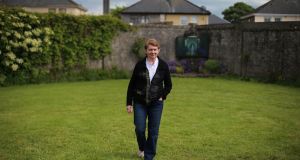 Local historian Catherine Corless at the site of a mass grave for children who died in the Tuam mother and baby home, Galway. File photograph: Niall Carson/PA Wire

Survivors and relatives of infants from the Tuam mother and babies home are planning a peaceful vigil in Co Galway to coincide with the papal Mass in Dublin’s Phoenix Park.

Historian Catherine Corless, who traced the death certificates for 796 infants at the former home in Tuam town, will join relatives at the vigil on the afternoon of August 26th.

“Pope Francis needs to make a public statement saying he is sorry for what was done in the name of the church in the past, rather than meeting victims in private,” Ms Corless said.

“I cannot see what the problem is with a public statement of apology,”she added.

Ms Corless and members of the Tuam Babies Family Group will light candles and place a special sculpture made by Flemish women in the shape of a baptismal font at the grave site of the former Bon Secours home.

They will also read out the names of those who are believed to have been buried there.

The event has been timed to coincide with the Mass that Pope Francis will celebrate at Dublin’s Phoenix Park. He is due to spend 55 minutes at Knock shrine in Co Mayo on the morning of Sunday, September 26th, before the Mass in Phoenix Park.

Ms Corless said she would not be travelling to Knock. She said there had been a groundswell of support for the Tuam event.

Last month, Minister for Children Katherine Zappone said that a recommendation on the future of the burial site of the former mother and baby home in Tuam is expected to be announced in early autumn.

Ms Zappone told a public meeting in Tuam it was her personal opinion that the possibility of exhumation and reinterment in a respectful and sensitive manner should be investigated. The Minister also said she was willing to introduce any legislation required to ensure the approach decided on could be carried out.

The State’s Commission of Investigation, which was set up to examine the actions of 18 State-linked religious institutions, confirmed in March 2017 that it had discovered “significant quantities” of infant bones at the Tuam site, which was managed by the Bon Secours Sisters between 1925 and 1961.

Galway County Council was asked to liaise with the investigation, local residents and other interested parties, and it undertook a public consultation, which is intended to inform a future Government decision.