A year after Pope Francis visit, relatives highlight inaction by church and Government 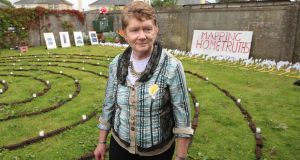 Historian Catherine Corless at the ceremony on Sunday: ‘It is a shivering thought that there are so many little babies buried down here.’ Photograph: Joe O’Shaughnessy

Survivors and relatives of people who died in the Tuam mother and baby home have accused the Government of denying them justice by failing to carry out a full exhumation of the site and give the children dignified burials.

The families and survivors came together at the Co Galway site on Sunday to mark the anniversary of Pope Francis’s visit to Ireland and highlight what they see as inaction by both the Catholic Church and the State in response to their demand for a full explanation about what happened in the home.

Minister for Children Katherine Zappone spoke to the pope when he visited Ireland last August and then wrote to him about the history of mother and baby homes in Ireland, their high mortality rates and the burials of children on the grounds of the former Tuam home.

In a short letter of reply to Ms Zappone in November, the pope said: “I wish also to assure you of my prayerful solidarity and concern for this sad situation, and I pray in particular that efforts made by the Government and by the local churches and religious congregations will help face responsibly this tragic chapter in Ireland’s history.”

Historian Catherine Corless, whose research found death certificates for 796 children at the home, run by the Sisters of the Bon Secours, but no indication of their burial places, said campaigners have been faced with a “wall of silence” in their efforts to get closure.

A giant labyrinth made of turf was put in place at the site and a number of artists from Galway and Clare joined the group for poetry and songs, in what was described as a “peaceful protest” to keep pressure on the Government.

“It is a shivering thought that there are so many little babies buried down here,” said Ms Corless. “This is a call for the Irish State, the church, and the Bon Secours order to listen to the families and the survivors, and to do something about this.”

Ms Corless said the exact location of the buried children was known since the publication of the Fifth Interim Report of the Commission of Mother and Baby Homes in April, and that campaigners had mapped out the burial chambers before the ceremony.

“Anyone that walks in here today cannot but be moved by the love and the care that was put into these exhibitions here. People care so much about the babies who were put into the sewage tank, and if only the Government and the Church could show a bit of care, just as the people have here today,” she added.

Annette McKay, whose older sister is one of the 796 “Tuam babies”, travelled from Bury in England to show solidarity with the survivors. After emigrating to England, her mother only opened up about the child she lost in Tuam years later when aged 70. Ms McKay, a member of Bury Council, said her mother had kept the existence of her eldest daughter, and her life in the home, secret from her family for virtually all of her life.

Ms McKay accused the Government of abdicating its responsibility in relation to the survivors of religious institutions across Ireland.

“Everybody blames the Church, and the Church was a big part of it, but the State abdicated responsibilities for its citizens and allowed these human rights abuses to continue for so long. The Irish Government cannot say that it had nothing to do with them.”

Campaigner Izzy O’Rourke said the only way to find out the truth about what happened in the home was for the site to be excavated.

“The people of Tuam are very much on board with investigating this site now. Until that’s done, there will be no truth about what happened here.”