Tuam excavation: Government unsure what it is ‘getting into’ 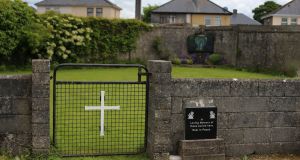 The site of a mass grave for children who died in the Tuam mother-and-baby home in Co Galway. Photograph: Niall Carson/PA Wire

The Taoiseach has said the first excavations at the site of the former Tuam mother-and-baby home will begin in the second half of next year and that Government does not know what it is “getting into” yet with the initiative.

Leo Varadkar said legislation would have to pass through the Oireachtas before the work began but that the Cabinet had agreed to a “phased approach” to the forensic excavation and recovery of the remains.

Following on from the work of Co Galway historian Catherine Corless, who gathered death certificates for 796 infants linked to the home, a Commission of Investigation into mother-and-baby homes found “significant quantities” of human remains in disused septic tanks in Tuam.

We’re not entirely sure what we’re getting into, but as a Government we’re convinced this is the right thing to do

Mother-and-baby homes were institutions generally run by nuns where women who became pregnant outside marriage gave birth. In the main these babies were adopted, often by Catholic families in the US, in return for a donation.

The Bon Secours Sisters, which ran the home in Galway from 1925 to 1961, has offered €2.5 million towards the cost of the excavation. The State faces a bill of up to €12 million.

Mr Varadkar said the Government had begun the work of identifying experts while the legislation makes its way through the Oireachtas ahead of any excavations. The initial work at the Tuam site will focus on the remains known to be in the chambers identified by the commission. Remains that are recovered will be analysed and, where possible, identified.

“We’ve never really done this before in Ireland, on this scale, so we’ve a lot to set up, and a lot to learn before we do it,” Mr Varadkar told reporters during an end-of-year interview.

“We’re not entirely sure what we’re getting into, but as a Government we’re convinced this is the right thing to do, to remove the remains and to give those children a proper, decent burial they didn’t get and if possible to identify some of them if we can, if the technology allows that.”

Minister for Children Katherine Zappone wrote to Pope Francis on the issue after his visit to Ireland earlier this year. She explained the history of mother-and-baby homes in Ireland, the high mortality rates in them and the burial of children on the grounds of the former home in Tuam.

The Minister sought from the pope that the church “accept its responsibilities and make reparation for its party in a very shameful chapter of Irish history”.

In a three-paragraph response on Vatican-headed paper, dated November 13th, the pope said he was praying that “efforts made” by the Government and the Catholic Church in Ireland will help “face responsibly this tragic chapter in Ireland’s history”.

He made no reference to a financial contribution to the excavation of unidentified human remains from the site of the former home.