‘This will teach you, offer it up for the sins you committed’ woman told after painful birth at Sean Ross

Tipperary home had exceptionally high infant mortality rate, even for the time 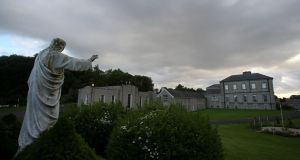 In 1934, a man sued, alleging his 23-year-old daughter, who was resident at Sean Ross, had been mistreated, leading to her death, the report states. Photograph: Niall Carson/PA Wire

Over one sixth of the children in Sean Ross Mother and Baby home died there, with mortality rates reaching 50 per cent in the 1930s.

According to the Mother and Baby Homes Commission of Investigation report, the home had an exceptionally high infant mortality rate, even for the time.

Almost 6,500 women and 6,790 children passed through the Tipperary home, which operated between 1931 and 1969. During that period, it recorded the deaths of 1,090 children who were born or admitted there.

Diphtheria was the leading cause of death in the 1930s and 40s when Sean Ross recorded its highest infant mortality rates, the report said. Mothers in Sean Ross, which was run by the Congregation of the Scared Hearts of Jesus and Mary, were required to work in the nearby fever hospital in Roscrea.

The report noted many children became ill shortly after their mothers returned from work.

“It is probable that mothers transmitted the infection to their children.”

In 1936, almost 100 children died in Sean Ross, a mortality rate of over 50 per cent with the rate then decreasing sharply before spiking again at over 40 per cent during the Emergency.

The report records evidence from a local carpenter who said he received an order for child coffins in the mid-1950s. However he understood these coffins were only for the children born to daughters of “respectable fathers” and that most infants were buried in quick lime, without coffins.

The report cites evidence that overcrowding in the home became a problem just months after it opened in 1931. Shortly afterwards a bishop noted there were “three classes of women” in the home: “Feeble or weak minded” women who would never be able to take care of themselves, “naturally decent girls” who have “fallen through accident or environment” and “wild and vicious women who are a harmful influence wherever they prevail.”

In the early 1930s, reports stated infant mortality was a serious concern due to infectious diseases. One report noted there were too many children in the nurseries and isolation was not possible.

In 1934, a man sued, alleging his 23-year-old daughter, who was resident at Sean Ross, had been mistreated, leading to her death. An inquiry found the woman was suspected of having a venereal disease by the doctor there and sent to two hospitals, both of which turned her away.

She was forced to return to her family home where she later died. It later transpired she did not have a venereal disease but had died from sepsis.

Sometimes politicians tried to get women out of Sean Ross. The report notes that usually a woman’s family would be happy to take the women home but they would not want the baby.

“In one such case in the early 1960s, the woman’s mother was prepared to take the child but the woman’s brother would not allow the child into the family home.”

As a result the mother and child were forced to stay in the home for another three years before the child was adopted to the US.

One woman at Sean Ross said she was given no option but to give up her child for adoption. She said she watched from the window as the child was driven away. “Sure I cried my eyes out and that was it.”

By 1969, adoption accounted for the vast majority of child discharges from Sean Ross. Just 25 children went home with their mothers that year, compared to 134 who were adopted. The vast majority of foreign adoptions went to the US.

Childbirth at Sean Ross was described as “horrific” by one resident. “They actually tied me, because I was in pain, I thought I am going to die ... and it was absolutely horrific, but anyhow once it is over and I was told I suppose, this will teach you, offer it up for the sins you committed and all that.

“You felt that too, that that is why you got more pain maybe than maybe another one, you know.”

She had to return to work in the steam room a few days later.

Another mother said the childbirth experience was “desperate” and that she was shoved down on a bed by a doctor who did not speak to her. She said a nun “nearly went mad” at her because she wet the floor.

Another woman said the food in Sean Ross was “sparse” and she was “constantly hungry”.

“I found, Oh God, I was always starving. But you get used to it. Nobody else had it.”

While in the home, women were given “house names” instead of their own names, according to testimony.

Incoming and outgoing letters were censored. One woman said she wrote to her aunt complaining about the food. A nun read the letter out in the dining room before making the woman eat it.

Another resident said she was once forced onto her knees to apologise to a nun, “another part of the humiliation and shame” she was subjected to every day.