Taoiseach apologises on State’s behalf over mother and baby homes 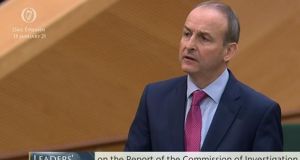 The Taoiseach has apologised on behalf of the State to former residents of mother and baby homes for the way they were treated over several decades.

In a statement in the Dáil on Wednesday, Micheál Martin said the report of the Commission of Investigation into Mother and Baby Homes highlighted a “profound failure” of empathy , understanding and compassion over a long period.

He said children born outside of marriage were treated as outcasts, and “this was unforgivable”. The sense of abandonment was palpable and the continuing lack of birth information was a terrible burden in their lives, he said.

Many women and children left Ireland because of the stigma and abuse, Mr Martin said. “We honoured piety but failed to show even basic kindness to those who needed it most.”

The Taoiseach said he wished to apologise on behalf of the State for the “profound generational wrong visited upon Irish mothers and their children” in mother and baby homes and county homes”.

“As the commission says plainly, they should not have been there,” he said. “I apologise for the shame and stigma they were subjected to.”

Addressing the survivors, Mr Martin said: “Each of you was in an institution because of the wrongs of others. Each of you is blameless, did nothing wrong and have nothing to be ashamed of.

“The lack of respect for you is deeply acknowledged and deeply, deeply regretted.”

Mr Martin said “the Irish State funded these institutions” and had authority for directing their operation. “This authority was not exerted, and the State’s duty of care was not upheld. The State failed you, the mothers and children, in these homes.”

“It is the duty of a republic to be willing to hold itself to account. To be willing to confront hard truths – and accept parts of our history which are deeply uncomfortable,” he continued.

“This detailed and highly painful report is a moment for us as a society to recognise a profound failure of empathy, understanding and basic humanity over a very lengthy period.”

He added: “The report gives survivors what they have been denied for so long: their voice, their individuality, their right to be acknowledged.”

Mr Martin said Ireland had in the past “embraced a perverse religious morality and control” but shunned our daughters.

“We had a completely warped attitude to sexuality and intimacy, and young mothers and their sons and daughters were forced to pay a terrible price for that dysfunction.”

The apology follows the publication on Tuesday of the commission’s report, which states that 9,000 children died in the homes between 1922 and 1998. In all, 15 per cent of the approximately 57,000 children who were in the 18 institutions investigated by the commission died during their time there.

One of its main recommendations was that people born in such homes should to have a legal right to access their original birth certificate and to information about their birth parents.

It also recommended compensation, modelled on the redress scheme set up for Magdalene Laundries survivors, be paid to some women who were in the homes, and are still alive, along with children who spent time there.

Earlier, People Before Profit TD Richard Boyd Barrett claimed that, in comments on Tuesday, Mr Martin had attempted to spread responsibility for the abuse of women and children to wider society.

Mr Martin said, however, that when briefing survivors in an online meeting on Tuesday – ahead of the publication the report – “I spoke of the perverse moral code overseen by the church that in my view was responsible for this in terms of its attitude to sexual morality.”

Mr Boyd Barrett also criticised the report, saying some of the phrases in its executive summary “are disgraceful and should be withdrawn” and were trying to disperse responsibility to wider society.

“Some of the passages of the report tried to shift abuse away from the Church and State,” he said. “The report and official political commentary are beginning to look like a sham, and an insult and a whitewash.”

The Catholic Church and the operators of several mother and baby homes have issued separate apologies.

Tánaiste Leo Varadkar said “today is a day of atonement, when we express our horror and sorrow at the story of Ireland told in this report, when we promise to do right by those who suffered”.

He said that “as Tánaiste, as a former taoiseach, and as a member of the Government that established this commission, I want to offer my own apology to the children who were hidden away, treated as a commodity, or as second-class citizens and to the mothers who for whom there was no other option but to give up their child”.

“They may have consented but it was not free and informal consent in the way we understand that concept today,” he said. “I think this report ‘shames Irish society’. Woman pregnant outside of marriage, some very young, some victims of rape, were not supported by their families or by the father of the child.”

He said “church and State re-enforced social prejudice and judgement when they should have tried to change it”.

“As a society, we stole from them the lives they should have had.”

The Fine Gael leader said that a “meaningful response must match words with actions, by making restitution for the suffering that occurred”.

Minister for Children Roderic O’Gorman said the publication of the report was another moment of truth for Irish society. He said the debate was a time to acknowledge the State’s role and to apologise for it and also to commend the strength of the survivors and their refusal to be silenced.

“You have waited a long time, too long, for this recognition,” he said, adding that central to the response would be an attempt to provide “access to personal information”.

“Legislation on information and tracing is being advanced this year, centred on a person’s right to information about themselves and founded on GDPR principles,” hes said.

His department would put in place mechanisms whereby survivors and adoptees can seek personal information when the commission’s archive transfers to his department at the end of February.

Mr O’Gorman said the Government’s response contains “a package of health supports” including an enhanced medical card and counselling. Legislation to allow for the dignified exhumation of the site in Tuam and to provide for DNA identification will undergo pre-legislative scrutiny shortly, he added. The Government has also committed to introducing a restitution scheme which would include financial recognition.

Sinn Féin leader Mary Lou McDonald hit out at the report’s assertion that there were “no forced adoptions” and its claim of “little evidence of physical abuse”. She said this and an attempt to “shift responsibility from the churches and State” that has left survivors shocked and outraged.

Ms McDonald said it was “plainly untrue” and a “distortion of history” to say society was responsible and she called for both church and State to contribute to a restitution fund.

Insisting that provision had to be made for the excavation of sites of former homes, she said the pledge to establish a “national archive of institutional, adoption and other care-related records” must be acted on.

Labour leader Alan Kelly said legislation must be introduced to secure a contribution from religious institutions if they do not contribute to the State’s scheme.

“I will draft the Bill myself,” he said.

He also said the Government should be able to introduce adoption and tracing legislation within weeks. The capacity was there, he said, given emergency Covid-19 legislation and laws to save the banks had been introduced quickly.

Expressing concern that Mr O’Gorman had set an end-of-year deadline for the legislation which was central to survivors, Mr Kelly said it should be revised and introduced soon.

Social Democrats TD Jennifer Whitmore said the “injustices and horrors that were forced on women by the hands of the State and the church” were “a stark reminder of our dark side”. She criticised some of the findings of the report and said mother and baby homes were not places of refuge.

The State established, funded and regulated these institutions and outsourced their responsibility to religious institutions.

People Before Profit TD Bríd Smith said the commission’s report should be rejected in its entirety. She said that despite the testimony of survivors, the commission contended that there was little evidence of gross abuses or evidence of profits being made from adoptions, which she found shocking.

Ms Smith described the Taoiseach’s apology as “wholly inadequate” and said he attempted to make everyone responsible, thereby ensuring no one was held responsible.

Rise TD Paul Murphy said the homes were “hellish Church-State institutions” as he called for religious orders’ assets to be “seized” and used to help survivors.

He said the church had a financial responsibility for what happened in those homes and “they should not get away with it”.

Independent Tipperary TD Michael Lowry said the homes operated at a time when men ruled and women had to cater to their needs. He said that a devoutly Catholic Ireland lived by the church’s teaching and pregnancy outside marriage was the “ultimate shame”.

“The fist of the church slammed the women,” he told the Dáil.

Independent Galway TD Seán Canney commended those for lived near the former Tuam mother and baby home for maintaining a nearby burial site.

He criticised the leak of elements of the report as a “grotesque injustice” to the people who suffered so much and he warned a similar commission might in future be required for the direct provision system if it is not reformed.

Independent TD Catherine Connolly held up a copy of the executive summary of the report which she said TDs had received but survivors did not get before it was published despite a Government pledge. She said they instead had access to a webinar at which they were told the Government’s view and then told they could download the 3,000 page report.