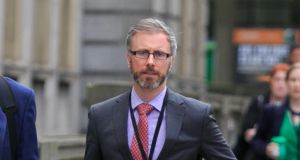 Roderic O’Gorman asked the Government to examine the source of a leak of information about the Mother and Baby Homes report. File photograph: Gareth Chaney/Collins

The State’s most senior civil servant is to head up an inquiry into the leaking of Government information.

Martin Fraser, the secretary general of the Department of the Taoiseach, is to lead the investigation, which will focus on the Mother and Baby Homes leak, but also the broader issue of unauthorised dissemination of material relating to the business of Government, Cabinet and Cabinet sub-committees, a Government source confirmed.

It follows a request from Roderic O’Gorman, the Minister for Children, for the Government to examine the source of the leak of information about the Mother and Baby Homes report to a newspaper last Sunday.

The report was launched today, but the leak was criticised by survivors’ groups and the Opposition.

In a statement, a Government spokesman said: “The Cabinet agreed this morning that the Secretary General to Government will be asked to examine the leak of last Sunday.”

He has also been asked to examine the broader issue of unauthorised dissemination of documentation and other information related to the work of Cabinet sub-committees and the Cabinet.”