State failed in ‘duty of care’ to Magdalene women - Flanagan 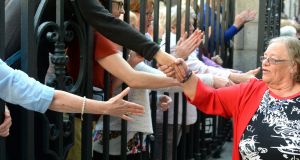 The State failed in its duty of care to the women who were incarcerated in Magdalene Laundries, Minister for Justice Charlie Flanagan has said.

Speaking at a banquet in Dublin’s Mansion House in honour of the women on Tuesday evening, Mr Flanagan said the State had let “each and every one of you down” by allowing them to be incarcerated and made to work in the laundries.

“We had a duty of care, we had a job of inspection, and we failed. Indeed we even took on the role, in some cases, of referring agents. And in so doing, we let you down,” he said.

The event, organised by Justice for Magdalenes Research and businesswoman Norah Casey, was held to pay tribute to the women who spent time in 10 laundries across the State run by four religious congregations, where they were detained and made to work for decades in some cases.

The Minister expressed his “boundless admiration for, and thanks to each and every one of you for making the effort to come here. I know it wasn’t easy.”

Mr Flanagan said his decision to give effect to key aspects of the restorative justice scheme was one of the most satisfying of his life in politics.

There was a warm reception at the banquet for the 230 women, who were cheered, applauded, hugged and called heroes by those present. Signs carried by the hundreds who gathered to support them at the Mansion House read ‘Welcome Home’, ‘The Women of Ireland Salute You’ and ‘Welcome Home, Sisters’.

Some were unable to walk and had to be carried in on stretchers, others used walkers.

Sr Stanislaus Kennedy, of Focus Ireland, said she was “delighted the Magdalene women are being honoured and given the respect they should have been given years ago.

“I came because I knew it was happening. I wanted to cheer them on.”

Colm O’Gorman, of Amnesty International Ireland, said it was “phenomenal to see so many people turn out” to pay tribute to the women.

He said it was “just fantastic to see acknowledgement and commemoration more than anything else”.

Emily Logan, of the Irish Human Rights and Equality Commission, said Irish society was acknowledging the women after “State and society were complicit in terms of what happened” to them in the past.

Samantha Long carried a photograph of her birth mother Margaret Bullen with herself and twin sister, Henrietta. It was taken in May 1995 at the Gresham Hotel when they met that first time “after a two year search.

Lord Mayor Míchéal Mac Donncha said that for too long “the voices of those in our country who were gravely wronged were silenced.

“No more,” he said. “Those so long treated as non-persons by church and State are being heard. Their voices must be listened to, their stories cherished, their rights vindicated.”

Among those who provided entertainment for the banquet were Christy Moore, Dana, Donal Lunny and Paddy Glackin, Mary Byrne, Philomena Begley and Pauline McLynn.