State apology to survivors must be backed by real action, says McDonald 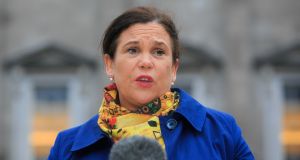 Sinn Féin president Mary Lou McDonald said the State needed to now facilitate all people who wanted to get access to records in relation to themselves and their birth. Photograph: Gareth Chaney/Collins

The value of a State apology to survivors of mother and baby homes will be measured in the actions taken by the Government afterwards, Sinn Féin leader Mary Lou McDonald has said.

Ms McDonald said the State needed to facilitate all people who wanted to get access to records in relation to themselves and their birth.

Speaking following the publication of the report by the Commission of Investigation into Mother and Baby Homes, Ms McDonald said the planned apology due to be given by Taoiseach Micheál Martin must be matched by “real action”.

She said the report “records a litany of misery and heartache, of separation, and systemic human rights abuse. It is worth saying this network of mother and baby homes was overseen in full sight of the Irish State and the Irish Governments. It is therefore appropriate that Micheál Martin will make an apology to the survivors.”

“We are very clear that not just this week but also in the time ahead the voice of survivors, their families, their advocates and the adopted community must be front and centre. The value of any apology from the Taoiseach will be measured by the actions thereafter. We need to see real redress, we need to see an end to the situation which exists to this day in which the State and State authorities still frustrate people in accessing their own records including our own birth certificates.”

Ms McDonald also said that the Catholic Church had a case to answer but so too did other denominations.

“In the final analysis it is the State that vindicates citizens’ rights. A grave offence for women and children and girls in the Ireland that was a very cold house for them is that the State did not defend their basic human rights. An apology from a sitting taoiseach has to be a bit more than an understandable moment of regret and sorrow, what is more necessary is what happens next.”

Aontú leader Peadar Tóibín TD said survivors of mother and baby homes had not had all their questions answered.

“This long, challenging report today leaves many questions unanswered for survivors. I know of one elderly man who was separated from his brother, as a child, when he left the home. He doesn’t know where his brother is, or if he is still alive. He has a feeling in his heart that his brother may be in London. As he grows older and more frail he is becoming more and more curious about his long lost sibling. This report does not tell him where his sibling is, although it is likely that the commission and the sealed documents with Tusla hold the answers to his question.”

Labour leader Alan Kelly said that time needed to be given for families and survivors to properly digest the 3,000-page report.