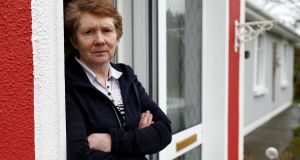 The report of the State investigation into mother-and-baby homes will release survivors from the shame they carry, historian Catherine Corless has said.

The 4,000-page report by the Commission of Investigation into Mother and Baby Homes was presented to Minister for Children Roderic O’Gorman on Friday. It will be published after it has been reviewed by the Attorney General.

The report includes the testimonies of people who lived and worked in 14 mother-and-baby homes and four county homes between the 1920s and the 1990s.

Ms Corless, whose work led to the discovery of infant remains in Tuam, Co Galway, and the setting up of the commission, said it was “wonderful” that the report had been finalised.

She said she hoped the “whole truth of what happened” would be revealed, and that “nothing will be covered up”.

“It’s a shame that we don’t get [the report] today so that we would know exactly. I know this will mean an awful lot to survivors of Tuam home and all the homes. Just an acknowledgment of what has happened to them because that is their pain,” she told RTÉ’s The Late Late Show.

Ms Corless said survivors of the homes still carry shame and this report would help release them from that.

The historian said that many survivors seek their personal information from Tusla, the child and family agency, but a lot of the information is redacted.

“Their own files, their own life, and yet they’re not allowed to see what’s in those files. That’s what they want. They just want information. Identity is a huge thing with them. To know their identity, to know where their mother went, to know was she alright, to know how she fared in life,” Ms Corless said.

“When you think about it, it’s so cruel to deny them. It’s wrong. It’s a basic human right to know your identity. They’re still treating them as second class citizens.”

Ms Corless believes that most of the mothers from the homes would want to connect with their children, and only in “the very odd case” a mother might say they do not want to be known.

She added that the Government must apologise to the people affected by the homes.