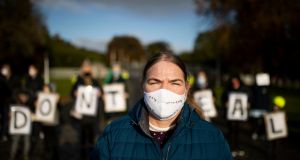 Majella Connolly, who was born in St Patrick’s mother and baby home on the Navan Road, attended the protest outside Áras an Uachtaráin. File photograph: Tom Honan/The Irish Times.

Politicians should not expect ordinary citizens to challenge controversial legislation on mother and baby home records and should instead deal with the matter themselves, a protest in Dublin has heard.

President Michael D Higgins on Sunday signed the legislation, which transfers a database of 60,000 records on the homes to Tusla, into law.

However, in a statement he said that his decision leaves it open to any citizen to challenge the provisions of the Bill in future.

Opposition TDs and survivors of the homes have expressed outrage and anger at the handling of the legislation, which they said should be halted or delayed for further debate amid fears that the records will remain sealed for 30 years.

Minister for Children Roderic O’Gorman has stressed, however, that the new legislation does not seal records for 30 years. He said there were legal issues to overcome in relation to the 2004 Act but “we need to fix this problem and I am absolutely committed” to doing so as it is no longer “morally feasible” to deny people access to the information. He believes the Oireachtas could quickly deal with the issues involved.

About 100 people gathered outside Áras an Uachtaráin on Monday afternoon in protest at the Bill being signed into law. Attendees held posters calling on the Government to Stop the Seal and placed baby shoes on the railings and trees to represent children born into the homes.

Ruth Coppinger, a former Solidarity TD and one of the demonstration organisers, said they would continue to protest “until this issue is resolved”. She said the campaign welcomed the President’s statement on the legislation.

It is understood that the President’s view is that the Bill would not be found by the Supreme Court to be unconstitutional in any legal challenge.

Mr Higgins is believed to have reached a clear conclusion that there is no question over the constitutionality of the Bill. Were he to form a view that there could be a constitutional impediment to signing the Bill into law, he would have been obliged to assemble the Council of State and seek its opinion. However, no meeting of the advisory body was arranged.

His statement has been interpreted by some as effectively an encouragement to challenge the constitutionality of the Bill, but it is understood that this was not the intention of the statement.

Several legal scholars have defended the President’s comments, noting that objections to the Bill are on the grounds of policy rather than constitutionality.

Under article 26, the President can refer a Bill, after consulting the Council of State, to the Supreme Court for a ruling on its constitutionality. However, if the Bill is passed by the court as constitutional, it cannot be challenged in court again.

The protest heard there was an “impression being given that some ordinary Joe or Josephine can just leg it up” to courts to challenge the legislation.

“Politicians should not think they can leave it up to people to take a case,” said Ms Coppinger. “That’s not acceptable. Ordinary people aren’t used to doing those things and don’t have the money or wherewithal. This has to be dealt with politically.”

She added: “It really is up to Fianna Fáil, Fine Gael and the Greens to sort this out. It is not up to people to raise money and pay barristers.”

Ms Coppinger also called on the President to address the nation or address the Oireachtas on the matter “to maintain political pressure”.

Majella Connolly, who was born in and adopted from St Patrick’s home on the Navan Road, Dublin, said all she wants is to “be given my information”.

“Give me my basic rights,” she said. “We don’t know where we’ve come from, we don’t know who we look like. I had to wait until the birth of my son to meet the first blood relation in my whole entire life.”

The group intends to hold another protest next Saturday outside the St Patrick’s home on the Navan road.

Mr O’Gorman last week said the Bill protects the database, which otherwise would be “put beyond reach”. He said the Bill is “not the end point” and that he is “in touch with the Attorney General on legal ways to improve access to records”.