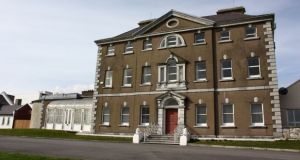 The Congregation of the Sacred Hearts of Jesus and Mary ran the Bessborough Home in Cork city for almost 80 years, during which times 923 infants died there. File photograph: Provision.

A religious congregation has said it did everything within its power to help the Commission of Investigation into Mother and Baby Homes locate the graves of more than 900 babies who died at one of its homes.

The Congregation of the Sacred Hearts of Jesus and Mary ran the Bessborough Home in Cork city for almost 80 years, during which times 923 infants died there. However, only a number of graves for the infants have ever been identified.

In an interim report published in 2019, the commission said it was only able to establish where 64 of the children were buried and that it seemed only one was buried in the Bessborough cemetery where many of the nuns were.

The commission went further in its final report when it expressed doubt that no one in the congregation was able to say where the vast majority of the infants were buried.

“The Commission finds it very hard to believe that there is no one in that congregation who does not have some knowledge of the burial places of the children,” it stated. “The Commission remains perplexed and concerned at the inability of any member of the Congregation of the Sacred Hearts of Jesus and Mary to identify the burial place of the children who died in Bessborough.”

The congregation responded on Wednesday, saying it deeply regretted that so many babies died in Bessborough, particularly in the 1940s when in one year infant mortality hit 70 per cent.

It further acknowledged that the issue of where so many of those babies were buried had “understandably become a matter of immense controversy”.

“We are distressed and saddened that it is so difficult to prove with legal certainty where many of these infants were buried especially with regard to Bessborough,” said the congregation in a statement.

“We did everything possible including the engagement of a professional historian to assist us in our dealings with the Commission on this vitally important matter.”

The commission spoke to a man who did landscaping work at Bessborough between 1983 and 2003 and he said he did a lot of excavation work on grounds surrounding the nuns’ graveyard there.

He said he was never told not to undertake ground works in any particular area at Bessborough and some years later, an archaeologist told him that the area surrounding the nuns’ graveyard was suspected to be a childrens’ graveyard.

He said he frequently came across large bones while digging in this area but believed them to be the “very old bones of animals” because of their size and he found nothing that resembled a human bone.

The commission also spoke to some of the surviving nuns who worked in Bessborough, including Sr Mary, who worked in one of the nurseries there between 1948 and 1969 and again between 1970 and 1998.

She told the commission that she did not know anything about infant burials at the home but it was her belief that infants were buried in the same cemetery as the nuns.

A Sr Celeste said there was one infant death in the maternity hospital during her time in Bessborough between 1970 and 1985 and she believed the child was buried in a family plot in St Michael’s Cemetery.

A Sr Sheila said she was not aware of any infant deaths when she was there between 1971 and 1974 and 1977 and 1990, but added that infants who died in the home were buried in the congregational cemetery on the grounds.

A Sr Sarto told the commission that two infants died during her time (1981 to 1998) and both were buried in the congregational cemetery along with a third infant disinterred from elsewhere.

She said that a plaque was placed on a nearby folly in 1986 or 1987 and the congregation had organised a commemorative event to remember the infants who had died at the home.

She said she did not know where the children who died in Bessborough from the 1920s to the 1970s were buried, even though she had visited cemeteries in Cork to ascertain where they had been buried but without success.

She said that many women from Bessborough gave birth in St Finbarr’s Hospital near Douglas and, if a baby was born in St Finbarr’s and subsequently died there, she was not able to find out where they were buried.

Meanwhile, the Bishop of Cork and Ross Fintan Gavin has apologised for the Catholic Church’s role in creating a culture of fear, judgement and secrecy around homes such as Bessborough.

He said he was asking for forgiveness from all the pregnant and isolated women and their children who ended up in the homes.

Bishop Gavin welcomed the report which he said describes “a very sad chapter in our Irish history” and said he was particularly struck by the courageous testimonies of the women and their adult children who shared their stories.

“I feel a sense of shame and embarrassment for how, as a Church and a society, we failed so often to respond compassionately to their needs,” said Bishop Gavin, adding his thoughts were all the former residents of such homes.

“As Bishop I want to acknowledge the part played by the Church in contributing to this culture of judgement and secrecy which, at times showed so little compassion or respect for the women and their babies.”