No obstacle to publication of Mother and Baby Homes report, says Taoiseach

Report from commission received by Minister for Children on Friday 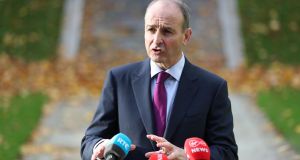 There are no “obstacles or barriers” anticipated to publication of the report of the Mother and Baby Homes Commission of Investigation, which was handed over on Friday, the Taoiseach has said.

Speaking on Friday afternoon, Micheál Martin said “Government is not anticipating obstacles or barriers to its release”.

Mr Martin also said the State would “not be found wanting in terms of a comprehensive response”. Asked if he would consider a State apology, he said he was “ruling nothing out at all”.

The Taoiseach repeated that it was the Government’s intention to create an institution that would act as a repository for records related to mother-and-baby homes, Magdalene laundries and industrial schools.

“The Government is committed to making such a centre a reality. And that would obviously connect in with the national archives as well, so that we’d have a very modern facility to enable people to access records, both on a personal level and also in terms of an academic perspective,” and for the general public “to have some sense of what happened in the various periods of the past in various centres and various institutions”.

He said he had met on Friday morning with groups involved in the mother-and-baby homes issue to discuss matters related to access to records and the rights afforded under the General Data Protection Regulation (GDPR), powerful EU laws that were transposed into Irish law in 2018. The discussion also focused, he said, on “the legislative agenda that is required in terms of getting a statutory access to records for people generally”.

The commission’s report was received by Minister for Children Roderic O’Gorman on Friday, following more than 10 days’ controversy over access to records. The Government initially argued last week that access rights under GDPR would be prohibited by the 2004 Commissions of Investigations Act, under which the commission on mother-and-baby homes was set up. However, this week the Government changed its policy on this.

Asked about legal advice given in the run-up to this policy change, a spokesman for Mr O’Gorman said the department engaged with the Attorney General’s office following receipt of the commission’s sixth interim report, which it received in February. Contact was made with the Attorney General “regarding significant issues the commission of investigation has raised regarding access to a valuable database it had created in the course of its work”, a spokesman for the Minister said.

“This involved consideration of the 2004 Commissions of Investigation Act.”

It is understood that broad advice was provided by the Attorney General’s office in relation to the database and the non-disclosure of records, and that this was interpreted by departmental legal advisers as supporting a blanket ban. On foot of that engagement, the department’s advice to the Minister was that “access to the archive produced by the commission through GDPR is expressly prohibited”.

However, following contact from the Data Protection Commissioner on October 19th, the department sought further advice from the Attorney General’s office.

The Attorney General then provided oral advice at Cabinet, and subsequently gave written advice to the department, “clarifying that the amended 2004 Act does not preclude the consideration of data requests by the department, which must respect the GDPR”.