Without such confidentiality there would be no Ryan, Murphy, Cloyne or Magdalene reports 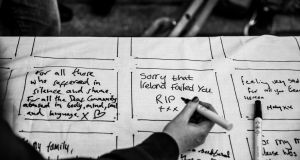 Anyone tempted to believe there is no smoke without fire might try journalism sometime. They would quickly discover that the laws of physics rarely apply in human affairs.

An immediate example was last week’s furore over the database of the Mother and Baby Home Commission. There was little substance but much smoke which unnecessarily upset vulnerable people central to this latest excavation of Ireland’s murky past.

It sowed doubt, disbelief and distrust in their minds with some already convinced they are about to be let down by Ireland again, and all before a sentence of the commission’s report has been published.

The report goes to the Government on Friday. It will not be published then, as some politicians claimed. That could take weeks, even months

This is a serious disservice to them and also to members of the commission who, over the past five years, have prepared the longest and probably the most distressing report of its kind in the history of this State.

The indications are that it will be as uncompromising as the 2009 Murphy report into Dublin’s Catholic archdiocese and the 2011 Cloyne report, both prepared under the leadership of Ms Justice Yvonne Murphy, who heads the Mother and Baby Home Commission.

The report is more than 4,000 pages long. The 2009 Ryan report, which investigated ill treatment of children in orphanages, reformatories and industrial schools, ran to 2,600 pages.

The report goes to the Government on Friday. It will not be published then, as some politicians claimed. That could take weeks, even months.

Behind all the confusion of last week was the erroneous assumption that the Government could push back the October 30th date for receipt of the report to allow for further debate on last week’s Bill, now Act, which transfers the database to the child and family agency, Tusla, while denying public access to it for 30 years.

The Government has no such powers. The commission sets that date. Set up by the State, it is independent of the State. Last week too it was erroneously claimed that the Data Protection Act 2018*  – which implements the EU General Data Protection Regulation (GDPR) – meant the commission could no longer abide by provisions of the 2004 Act which set it up, and stipulated that documents it accumulated must be placed beyond public access.

The Data Protection Act 2018 allows for exceptions, including where “official or legal inquiries” are concerned. Access to such information can, however, be arranged by separate legislation, which Ministers have promised to introduce.

A view implicit in some comments last week was that the commission was part of some grand conspiracy to hide away information which would protect those responsible for abuses in the mother and baby homes.

The commission is placing information beyond public access because of guarantees of confidentiality given to all 550 people who appeared before it, as determined by the 2004 Act, and assurances given to them that it would provide only an anonymised account of what they had to say.

The reasons behind this assurance of confidentiality are many. As was the case with people abused by priests in Dublin and Cloyne, the great majority of people who were born or gave birth in the mother and baby homes prefer to remain anonymous. Few have gone public. This applies particularly to the mothers.

It also meant there was no necessity for there to be legal representation present for those accused of wrongdoing, as would be the case if the evidence was given in public. Such an assurance of anonymity and confidentiality also ensured religious congregations co-operated with the commission as well.

The framing of the 2004 Act was underpinned by a desire, above all, to ensure inquiries take place as soon as possible over as short a time as possible and at least expense possible.

A huge influence on the Act was what has become known as the Ryan commission, set up in 2000 to investigate abuse at institutions for children. Initially it ran into great difficulty through legal challenges from the Christian Brothers (who ran many of the institutions), lack of co-operation from various Government departments (who oversaw them) and threats of legal action from academics involved in vaccine trials on children who had been in the institutions.

Then senior counsel Seán Ryan was appointed to investigate how the situation might be rescued and among his recommendations was that no Christian Brother (or other accused) would be named in the final report and that hearings involving former child residents of the institutions would be in private.

It was also agreed that representatives of the relevant 18 religious congregations, politicians, civil and public servants would give their evidence in public.

It meant that 1,400 survivors gave evidence to the Ryan commission’s investigation committee and 1,090 to its confidential committee. Few of these people have ever spoken in public. They gave their evidence on the basis of absolute protection which extended to the rest of their lives.

Some of their evidence included “a barrage of criticism on the basis of unproven or extravagant or extreme...allegations” against members of religious congregations, as Mr Justice Seán Ryan told this newspaper last year. Were those allegations made in public, the result would have been legal actions and, probably, no Ryan report.

The confidentiality clause allowed survivors tell their story fully and without fear. It was similar with the 2009 Murphy commission, the 2011 Cloyne commission, and now the Mother and Baby Home commission.

It also applied to the inter-departmental inquiry into the Magdalene laundries which reported in 2013. Without such confidentiality there would have been no Ryan, Murphy, Cloyne, Magdalene, or mother and baby home reports.

Means to an end

It was a necessary means towards a commendable end – exposing the truth of what survivors of the institutions or those children abused in parishes went through. Without it, none of that could have happened.

That it should now be construed as something otherwise is wrong and deeply regrettable. It is also irresponsible.

A criticism of the Ryan commission is that no prosecutions followed its report as documents it accumulated could not be made available to the Garda on those confidentiality grounds. But none of this prevented any survivor from repeating their allegations to gardaí and, indeed, members of religious congregations did end up before the courts as a result of allegations by those survivors.

It has also been claimed that confidentiality prevented survivors who received compensation at the redress board from making complaints to gardaí. This too is false.

Such survivors were prevented from discussing publicly proceedings at the redress board and what they received in compensation. But nothing prevented the 15,562 survivors who received such redress awards from repeating their allegations to gardaí. These reckless, false assertions help nobody.

Finally, it is generally agreed that Ireland’s laws must be changed to allow adopted people to access details of their biological parents. There is much sympathy with this view but it is not cut and dried either.

What of the mothers? Traumatised by being placed in such homes to begin with, then having their babies taken from them, and since then having to live with the sense of shame as accompanies women of that generation, this is an area where all must tread very softly indeed.

Many such women have built new lives which sadly may not include disclosure of their “lost” child. They must not now be made suffer further trauma at this stage in their lives.