Government ‘will not be found wanting’ in response to report, says Minister for Children 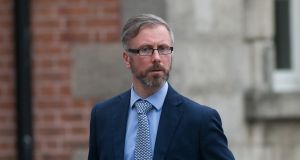 Minister for Children Roderic O’Gorman will also bring legislation to allow a phased forensic excavation at the site of the former Mother and Baby Home in Tuam, Co Galway. Photograph: Gareth Chaney/Collins

Details of a “massive societal failure” and misogyny that “permeated” Irish life for decades will be revealed when the Mother and Baby Homes Commission’s report is published next month, Minister for Children Roderic O’Gorman has said.

The 3,000-page report will be brought to Cabinet on the week of January 11th and given to survivors of the homes before being formally released.

In an interview with the Irish Times, Mr O’Gorman said the report reveals a “misogyny that went all the way from government to the State to the church, but also permeated all of society”.

The homes were generally institutions run by nuns where women who became pregnant outside marriage gave birth. In the main these babies were adopted, frequently by Catholic families in the US, in return for donations.

The commission, established in 2015, investigated the treatment and abuse of women and children in 18 such homes and four county homes between the 1920s and 1990s.

A section of the report will outline testimonies given by survivors to a confidential committee.

“Time and time again there are examples of really vulnerable young women, many of whom didn’t know what sex was, [some] who said they had sex with their boyfriend but didn’t know what happened and became pregnant,” Mr O’Gorman said.

“Or indeed vulnerable young women who were taken advantage of by a family member or raped. And then rather than being supported, were shamed and sent away to institutions that were deeply cold and massively unsuitable in terms of sanitary conditions. They subsequently had to bear this secret on their own.”

“How could fathers and mothers send their daughters away like this? How could so many Irish men and women decide ‘I don’t want that grandchild, we need to get that grandchild out and secret and away from us’. It’s really hard to comprehend.”

Asked if a State apology would be forthcoming in the New Year, he said Government “will not be found wanting” in its response to the report.

“I don’t want to prejudge the measures that the Government are going to take and agree at Cabinet level but I think the report demonstrates a massive societal failure. And I believe the Government will respond appropriately.”

Mr O’Gorman will also bring legislation to allow a phased forensic excavation at the site of the former Mother and Baby Home in Tuam, Co Galway. The commission was set up following revelations in 2014 by local historian Catherine Corless about the deaths of almost 800 children there.

There was controversy earlier this year over the level of access available to the commission’s records. Mr O’Gorman said work was underway on drafting information and tracing legislation to allow adopted people to have their birth information.