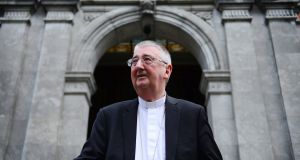 Archbishop Diarmuid Martin: ‘What went wrong to give rise to a situation in which children within the church of Jesus Christ were not cared for with scrupulous dignity, whether in life or in death?’ Photograph: Bryan O’Brien

The Catholic Archbishop of Dublin Diarmuid Martin has said he is profoundly distressed at the findings of fifth interim report of the Mother and Baby Homes Commission of Investigation.

“The church has to change,” he said. The report “leaves me with profound distress, even indignation. We are the church of Jesus Christ. Jesus considered children as a sign of his kingdom.

“What went wrong to give rise to a situation in which children within the church of Jesus Christ were not cared for with scrupulous dignity, whether in life or in death?”

He found it “hard to believe that evidence has simply vanished and that no one can remember.”

He recalled the words of Pope Francis to the Irish bishops as he left Dublin last August. “Do not repeat”, the pope noted, “the attitudes of aloofness and clericalism that at times in your history have given the real image of an authoritarian, harsh and autocratic church.”

Archbishop Martin said: “The Catholic Church in Ireland has to look constantly at negative effects of the way it exercised a dominant role in Irish society in the past, while at the same time not renouncing its prophetic role in society today.”

He was speaking at St Mary’s Pro-Cathedral in Dublin at the Holy Thursday Chrism Mass which traditionally focuses on the ministry of priests and renewal of their commitment. “We have great priests and we need to foster future vocations to the priesthood to serve the people of God in this growing and changing diocese,” he said.

It was, he recalled, his 15th time to celebrate the Chrism Mass as Archbishop of Dublin. Over those years “there have been major actions, positive and negative. However, the diocese has undoubtedly changed for the good over these years. I have constantly stressed that we have today parishes that have never been so vibrant at any other time in their history”, he said.

The archdiocese had “experienced the dramatic effects of the crisis of sexual abuse. We move forward, not whitewashing the past, but recognising how our parish communities have responded with great dedication putting into place and supporting child protection structures of which we can be rightly proud.”

“Parents were taking their part more actively in the preparation of children for the sacraments with two churches in Dublin specifically dedicated to ministry with young adults, “something quite unique in Ireland,” he said.

He was referring to St Paul’s Church on Arran Quay and the Newman University Church on St Stephen’s Green.

Consultations with the people indicated “a clear consensus about the way forward involving both a need and a desire to form new co-operation between priests and all the baptised . . . We are on the right road,” he said.

The overall population of the archdiocese was growing, he said. “In some areas the growth is spectacular. There are five parishes in this diocese with over 15,000 Catholics,” he said.

There was “strong faith” but “the culture is changing. Forty-eight per cent of those in the age group 24 to 29 living in the diocese registered at the last census as having no religion. Only a few of the parishes within the two Dublin canals have a majority Catholic population.”

Looking to the future “means to extricate oneself from the contingencies of the past to be free to look dispassionately to the future. Young people are growing up in a very pluralist culture and have to be supported and accompanied in finding a strong personalised faith,” he said.

He congratulated Fr Fintan Gavin, chancellor of the archdiocese, who has been appointed Bishop of Cork and Ross, and Auxiliary Bishop of Dublin Eamonn Walsh who celebrated the 50th anniversary of his ordination last week.