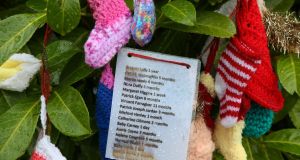 The name of babies and wollens hang in the rain in the Tuam babies burial ground on Tuesday. Photograph: Joe O’Shaughnessy

Much of what we know of Alice Litster exists in what she wrote well over half a century ago. And that is enough to know that Alice Litster was a remarkable person and well ahead of her time.

For 35 years up to 1957, she was an inspector for the then department of health and visited most of the institutions covered on Tuesday by the Mother and Babies Homes commission.

In fastidious and fearless reports, she highlighted the overcrowding, poor facilities, criminal lack of medical training in antenatal care, and the scarily high rate of infant mortality in many of them.

Noting her perseverance, the commission says Litster was was one of very few to “try valiantly to have conditions improved” among many hundreds who did not want to rock the boat.

Infant mortality – though high in society outside the walls of these institutions – was worse inside, and nowhere more so than in Bessborough home in Cork during the second World War years.

Pointing to the role played by overcrowding, poor diet and untrained nuns, Litster again and again demanded better conditions, including education for the high number of six year olds and older left unschooled.

It was only through her intervention that the authorities began a move to remove the mother superior, against fierce opposition from the local bishop and from the nun’s order.

Litster was backed up by senior doctors subsequently sent by the department. “That 60 per cent of children die would seem to show very little steps are taken to keep them alive. This is borne out by the fact that the babies still alive are covered with sores,” reported one, who noted that the approach was “criminally casual”.

Another doctor wrote. “The nun in charge of the infants’ department is both stupid and ignorant. The state of the children under her care is so terrible they they fail to lessen the queries of child neglect. She and all others must be held primarily responsible for the hundreds and hundreds of babies under her charge who have died in the last few years. She must be removed from her post immediately.”

The constraints and confines of society – not just by the State, or priests – were enormous. Litster and her colleagues had to implore homes and local authorities to accept women in. “Numbers of expectant mothers drift to Dublin every week hoping to find a home willing to receive them and keep their baby to adopt,” she wrote in 1945.

She and others called for attitudes to change, but that did not begin to emerge for another quarter of a century, through the work of journalists such as Michael Viney in 1964, Mary Leland and Ella Shanahan, who began writing about the issue from the perspective of the young women. Until the 1960s, most children born to single mothers were adopted;, by 1976 it had fallen to 43 per cent, and by 1990 to 8.5 per cent.

The experience of mothers and children who went to the institutions were mixed but for the overwhelming majority it was negative – poor conditions, stigma, a cold, loveless atmosphere, and emotional cruelty.

One child boarded out from Tuam ate breakfast with the family, but all other meals by himself in the back kitchen. Others were cruelly treated when boarded out, or fostered, or made do slave labour in the fields.

It was worse for mixed-race children who were called “half-caste”. The word “Negro” appears in the Pelletstown record four times.

There are dozens upon dozens of accounts of familial shame in the report, including the story of a pregnant girl forced out of home at 2am by her father and brother, and taken away in darkness so the neighbours would not know.

There is also an account of a teenager being beaten badly by her father, a guard, and her aunt in Dublin then refusing to take her in. A young woman in Wexford had to sleep two nights in a field after her family refused to take her and her seven-week old child back home.

A woman wrote to a priest asking her daughter in England not to set foot in Ireland. “She has disgraced her family and her country.”

The vast majority of young women who were working found themselves fired.

The “putative” fathers were mainly allowed to get away with consequences. In 1975, an official noted that “three-quarters of fathers were still running”. The youngest residential women were girls of 12 – although there seem to have been few or no convictions for rape.

Life in the institutions was hard. Women lost their identity, were given “house” names, were made do menial work, had freedoms restricted and were conditioned with “adoption brainwashing” to give up their babies.

“We were treated so badly, we were never allowed any kind of recreation, no talking was allowed during meal times. Letters were censored,” recalled a resident in Bessborough.

A man, born in Tuam, recalled his mother’s failed efforts to take him home with her over five years. “I was born in a jail. I got no love, no care, no education, no nothing. Then my mother spent 5½ years walking up and down making a fool out of herself.”

Others remember kindness from some wonderful nuns, and compassion. But for even the most benign memories, the underlying reality was wrenching and plaintive. The grief of a mother’s separation from her child was captured well by the late Connacht Tribune journalist John Cunningham. His father was caretaker of the Tuam home and he was a resident there as a child after his mother died.

“I saw the devastation when they were parted from their children. They nursed the child and looked after it for a year and then they went on their way. I don’t know if many of them ever recovered from the heartbreak in parting.”