Mother and Baby home survivor: ‘My identity, heritage and culture was taken from me’ 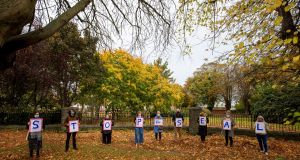 A survivor from a Mother and Baby home in west Dublin has said she is “very annoyed and angry” over legislation which was passed in the Dail earlier this week that would transfer records relating to the Mother and Baby Homes Commission to Tusla.

Majella Connolly, who was born in St Patrick’s Mother and Baby Home on the Navan Road in 1971, was speaking on Saturday as over 50 people gathered outside the former site in protest, amid fears that the records would be sealed for 30 years.

The controversial legislation transfers a database of 60,000 records created by the five-year investigation into the homes to the child and family agency Tusla.

Protestors gathered for a short period this afternoon wearing face masks and carrying signs which stated “Stop the Seal” and “Shame on you, repeal the seal”.

The protest, which was organised by former Solidarity TD Ruth Coppinger and Dublin 7/Dublin 15 Action against Gender Violence group, was attended by Ms Connolly and local residents.

“I had emailed Minister [for children] Roderic O’Gorman, he’s my local TD, asking him not do it and consider the people that this affected and he sent me a long-winded email back of what the proposed amendments were,” Ms Connolly told The Irish Times.

“When it [the Dáil] was suspended on Tuesday night, I thought there was a bit of a breakthrough with Minister O’Gorman but no sadly on Thursday night no...We’re [survivors] angry that we’re not allowed access our information.

“My identity, heritage and culture was taken from me. I was born innocent in all of this and inherited all of this.That’s the way I feel about it.

“I don’t think Tusla is the right agency to manage any of this. Any information you look for from Tusla, it’s all scrutinised and their famous word is ‘redacted’. We’re not allowed any information. I am not allowed know who I am.”

Mr O’Gorman has stressed that the legislation does not seal records for 30 years and apologised on Friday for his approach to dealing with the legislation.

Ms Coppinger, a former representative for Dublin West, said she was surprised by the Green Party and Minister O’Gorman “rushing legislation through when other options in the course of the debate did present themselves”.

“He is somebody who got elected on a progressive social justice agenda. He would have been associated with marriage equality and the repeal campaign. I think that’s why it’s such a huge slap in the face for people who would have voted for the Greens in particular,” she said.

“To say that we have to go along with a bad law, well then what is the point, we’ll never change anything that way.

“Women and young people in particular are not into accepting any sort of these oppressions any longer that my generation would have had to put up with. I think they have to keep up the pressure to get this reversed.”