Commission received 250,000 pages from Department of Health weeks from deadline 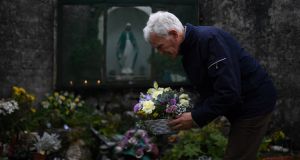 The latest delay to the publication of the final report of the Mother and Baby Home Commission was made unavoidable days before Christmas when it received 250,000 pages of documentation from the Department of Health. This came just two months before it was due to produce the final report.

The commission’s intention to also publish details on burials in its Fourth Interim Report on Tuesday also had to put back by a month as a member of the public recently came forward with questions about one of the three cemeteries at Seán Ross Abbey in Roscrea, where it is understood hundreds of children may be buried. A geophysical survey is to begin there on Wednesday.

The documents received last month were in addition to 54,000 pages the commission was sent last March from the Departments of Health and Children. A further 36,000 pages had been received from these departments in June.

The commission also expressed frustration at the HSE’s inability to supply relevant material, saying it was “dismayed that so little has been found” and that it was “clear that the HSE does not have any system, much less a proper system, of storing and archiving material”.

This is not the first time a commission has felt frustrated in its work by the HSE. Chapter 6 of the Murphy report – also chaired by Ms Justice Yvonne Murphy – published in November 2009, expresses similar sentiments. That commission investigated the handling of clerical child sex abuse allegations in Dublin’s Catholic archdiocese.

It details difficulties in dealing with the HSE in 2006 and 2007, leading to its “impression that the HSE was not adopting a systematic approach to locating records”. Eventually that commission made an order for discovery in February 2007.

The chaos continued, however, with documentation from the HSE forwarded to that commission as late as June2009, after its draft report had been concluded and five months before its final report was published.

Attention has again been drawn to the Mother and Baby Home Commission’s second interim report, published in April 2017, where it recognised that “the exclusion of most of the mother-and-baby homes and all of the county homes” from the 2002 Residential Institutions Redress Board scheme “warrants further investigation”. Children who had been in such homes “have a real cause for grievance”, it said.

In 2002 the scheme was set up to compensate those who spent their childhood in reformatories, industrial schools or orphanages. The cost of the scheme was €1.5 billion, with 15,579 people receiving awards averaging €62,250.

The amount of time spent by children in mother-and-baby homes and county homes was brief compared with those who had been in reformatories, industrial schools, and orphanages, so their redress may be lower.