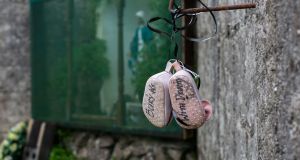 A pair of baby shoes with the message ‘Bury us with dignity’ hangs on a wall at the site of the Tuam mother-and-baby home. Photograph: Andy Newman

An expert working for the order of nuns which ran the Tuam mother-and-baby home in Co Galway argued in January this year that the underground structure containing infant remains at the site may have been “designed as a burial vault and then used as such”.

The suggestion was rejected by the Commission of Investigation into Mother and Baby Homes, which found in its interim report released on Wednesday that the structure “was not a recognised burial ground or purpose-built burial chamber”. The commission said the chambered structure “did not provide for the dignified interment of human remains” and was “likely” to be related to treatment of sewage and/or waste water.

The commission, chaired by retired Circuit Court judge Yvonne Murphy, was set up in February 2015 to investigate 14 mother-and-baby homes, and four “county homes”, which operated across the State between 1922 and 1998.

It also raised questions for religious institutions, communities and organs of the State about how the children’s remains were treated, and how their deaths were recorded.

In the instance of Tuam, a scientific analysis undertaken by the commission team on the underground chambers containing human remains “suggests that at least some of the chambers in which human remains were found were at some stage used to receive sewage”. The precise purpose of the overall structure, the commission found, is “likely to be related to the treatment/containment of sewage and/or waste water”. The commission also found that if it had been designed as a crypt “an entirely different type of structure would have been expected”.

When the commission shared its technical findings and a draft interim report with the Bon Secours congregation, the order commissioned its own expert to review the reports. That expert “suggested that the [commission’s] archaeological reports did not adequately consider the possibility that the structure in which the human remains were found was designed as a burial vault and then used as such”.

In a statement, a spokesman for the congregation said that after being asked to respond to a draft of the report the order commissioned a forensic archaeologist to assist in the process. “The brief was simply to examine the archaeological elements and prepare a report. He did so and submitted it to the commission. The commission has examined that report and has rejected its findings, as is their absolute right.”

The commission also found it is “likely the burials were conducted on the instructions of the sisters”. And it said Galway County Council did not respond when it shared draft and technical reports with the local authority in 2017 and 2018.

The interim report made a number of findings concerning the level of knowledge about Tuam within the local authority.

It said council members and staff “must have known something about the manner of burial when the home was in operation”. Board of Health meetings were sometimes held in the home itself. The report also found that employees of the council “must have known about the burials” as they worked on the site.

In a statement, Galway County Council said it “notes the contents” of the report. “The council has and will continue to afford the commission its full co-operation and assistance in undertaking its work.”

The local authority said it had no comment when asked further questions.

Catherine Corless, the local historian whose work led to the establishment of the commission, said she was “very, very pleased” with the report. She agreed with a suggestion made by Minister for Children Katherine Zappone that individuals must know more about what happened at Tuam.

In the Dáil on Wednesday, Taoiseach Leo Varadkar described the report as “gruesome reading” which “gives us a further insight into a very dark part of our history”.

“As a society we inherit a deep shame for what was done back then,” he said, adding that society had to atone for what happened in those homes.