Monument to honour residents of mother and baby institutions

Forum releases recommendations to provide healthcare and other supports to survivors 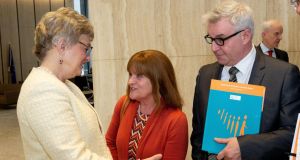 A national monument to honour women and children who were resident in mother and baby institutions looks set to be erected in the Phoenix Park.

There are also plans to hold an annual day of commemoration to remember the survivors of those institutions.

A collaborative forum of former residents has released a series of wide-ranging recommendations to provide healthcare and other supports to survivors. The forum’s full report cannot yet be published as the conclusion of the work of the Mother and Baby Homes Commission of Investigation has been delayed.

Members of the forum expressed frustration and disappointment on Tuesday that they could not publish their report in full.

The group has recommended access to free private health insurance, comprehensive private health assessments for survivors, and access to medical cards as well as DNA genetic screening so that they can identify their medical and family history.

They have also recommended the introduction of a lifetime stipend for survivors living outside of Ireland to cover their healthcare costs.

Speaking at a press conference with survivors, Minister for Children Katherine Zappone said a working group will report back to Government by September with a plan for the healthcare package, in time for Budget 2020.

“What I would envisage myself is that there will be some agreement around access to [healthcare], whether [it’s] GP services, counselling, mental health supports, possibly physiotherapy, dental supports.”

She said the Government does not yet know how many people will seek access to the new supports.

“We are establishing a working group to develop a package of health and wellbeing supports including access to appropriate health and social care services. We will also commission research into the use of language and terminology.”

On the recommendation for free DNA testing, Ms Zappone said: “If there is a recommendation that we need to do that, then we must do that. I think that will be made accessible to the survivors. That is not part of the immediate agreed actions, but it will go to the relevant department to be considered.”

Samantha Long, who chairs the memorialisation sub-committee of the forum, said a national monument is likely to be constructed in the Phoenix Park.

“I’m delighted to say that all of our recommendations have been accepted by the Minister and the Cabinet this morning and we are really very, very pleased about that. I had said to the Minister some time ago that she could gain early wins on memorialisation and she has achieved those wins. We hope they will be properly funded.”

She said the consensus on the committee was that the memorial should be in the Phoenix Park.

Other recommendations include local monuments, a plan to erect memorials at each institution as well as an annual commemoration day. There is also a plan to include a module on the national history curriculum for primary and secondary schools on the institutions.

We worked 12-hour shifts. They are institutions, every one of them. Never a home

The collaborative forum has recommended that financial and criminal sanctions be taken against “any interests” where it is found that personal or identity records were destroyed.

They are also seeking to have certain terminology used about the institutions changed.

Terri Harrison, who spent time in both Bessborough and St Patrick’s in Dublin, said using the phrase “mother and baby home” is “the worst and most hurtful thing for us to read. There was never a home, that infers care. We worked 12-hour shifts. They are institutions, every one of them. Never a home.”

A separate report on burial arrangements for those who lived in the institutions is expected to be published on Wednesday. This is the fifth interim report of the commission.

Ms Zappone said it is a significant report.

“It is very technical, there is a lot of complexity to it, I think it is probably the most significant interim report in that regard. It will answer some questions and leave other questions unanswered.”