Legislation may allow other mother-and-baby exhumations after Tuam 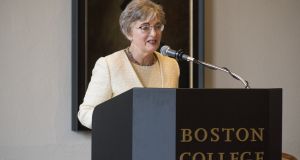 Speaking at Boston College, Minister for Children Katherine Zappone said: “I anticipate that in our drafting of the legislation in order to do the exhumation and excavation of the Tuam site, the issue of ‘is this just for Tuam or is it for other possible sites’ will be addressed.” Photograph: Peter Julian/Boston College

Legislation required to allow for the excavation of human remains at the site of the former Tuam Mother-and-Baby Home may allow for exhumations at the sites of similar institutions, the Minister for Children has said.

Speaking at Boston College in the US during a conference on the legacy of institutional abuse in Ireland, Katherine Zappone said the Government was aware that not looking at other sites could be an issue and was awaiting further findings from the Commission of Investigation into Mother and Baby Homes.

“I anticipate that in our drafting of the legislation in order to do the exhumation and excavation of the Tuam site, the issue of ‘is this just for Tuam or is it for other possible sites’ will be addressed,” she said.

Mother-and-baby homes were generally run by nuns where women who became pregnant outside of marriage gave birth. In the main these babies were adopted, frequently by Catholic families in the US, in return for a donation.

Ms Zappone’s proposal for a phased, forensic excavation of the Tuam site was approved at Cabinet last month. Sources said Ms Zappone was asked by colleagues if the excavation of other burial sites was possible as a result of the Tuam plan but it was not clear if Ms Zappone directly addressed such a possibility at that time.

Ms Zappone subsequently offered “personal apologies” to those affected by what happened at Tuam, where local historian Catherine Corless found death certificates for 796 infants buried at the site.

Dr James Smith, the organiser of the conference, called for other sites to be excavated. He said many survivors had welcomed the proposed Tuam excavation but there were many other institutions with so-called angel plots and unmarked graves where children and unmarried mothers were buried. “Though welcome, this is a model that very quickly needs to be applied to each and every one of the sites around Ireland that have children who are buried having died in State care,” he said.

Ms Zappone delivered the keynote speech at the conference, which brought together scholars in the field of “transitional justice” as well as Irish survivors of historical abuse and activists.