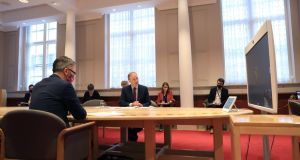 Helplines for survivors of institutional abuse have been “extremely busy” with some callers too upset to speak and while others “just cried”, following the publication of the mother and baby homes commission’s report.

The Society of Survivors helpline was set up by south Dublin Independent councillor Francis Timmons and Terri Harrison, both survivors of the homes, last year.

“I was doing one of the lines last night and I had a number of people onto me who were just devastated, very upset, very traumatised, very emotional,” Cllr Timmons said on Wednesday.

“A lot of people were looking for their information so hopefully we’ll be able to help them out to try to source details of their past.”

Barnardos, which has offered supports to birth mothers since the 1970s, is extending its helpline hours for the next fortnight in anticipation of increased demand.

Christine Hennessy, leader of Barnardos post-adoption and origins service, said many callers made contact for the first time, from early on Tuesday.

“Existing clients have been in touch as well because a lot of things have come up for them from the report. We are extremely busy. We’ve had several calls where somebody just cried and hung up the phone. People are very upset.”

The charity had not had any calls, she said, from birth mothers worried about being traced by adult children they had given up as babies in the homes.

“A lot of work in the birth-mothers’ groups is supporting these women to tell people in their lives about an original child placed for adoption.”

The One In Four charity, which works with survivors of sexual abuse had had calls from new and former clients for whom the report has been “deeply triggering”, said executive director Maeve Lewis. Many had been abused in orphanages and industrial schools run by the same religious groups that ran mother and baby homes.

The child and family agency, Tusla, “received a number of calls from members of the public since the publication of the report” and had “signposted” people to appropriate supports” said a spokesman.

“We are also providing and will continue to provide support where people wish to speak to a social worker within the adoption service, or wish to access the information and tracing service.

“It is widely known that Tusla has a particular role in respect of adoption services and so the report has particular importance because of the connections between the then homes and adoption. For now Tusla wants to assure all people affected by the report of our understanding and empathy in what are some of the most difficult life accounts recorded by the commission.”

A HSE spokeswoman said there had been a high volume of callers to the HSELive information service as well as to local HSE National Counselling Services numbers.

Cllr Timmons said a number of survivors had also been enquiring about hard copies of the report.

Prior to its publication, Minister for Children Roderic O’Gorman and Taoiseach Micheál Martin hosted a webinar with about 500 survivors.

“We are getting some copies off the Minister and we’ll try and get them to people and we’ll try and print off some if we can,” Cllr Timmons added. “It’s a 3,000-page report so there is a lot of pages. I had no problem getting onto the webinar but I know other people did have issues trying to connect to the webinar.

“There were about 500 people on the webinar yesterday but there’s thousands of survivors in Ireland. We’re told there’s about 57,000 living survivors so it’s a very small minority of people.”

The Department of Children said it was not providing hard copies of the report “at this stage” due to Covid-19 restrictions, adding “this is being kept under review”.

“The report is nearly 3,000 pages, staff are working remotely, and it is not conducive to widespread general circulation through the post. It is available online,” the department said.

“We understand that this may not be accessible to all who wish to read it, and are endeavouring to arrange for hard copies to be made available in publicly accessible arenas such as libraries and embassies abroad, however this is also being hampered by Covid restrictions.”