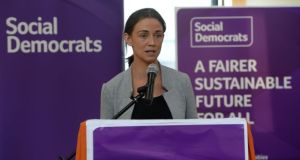 Holly Cairns urged the Taoiseach to call a halt to the legislation which has been passed by the Seanad. File photograph: Alan Betson

There were heated Dáil exchanges over controversial Mother and Baby Homes legislation when the Taoiseach insisted the Bill was necessary to ensure records “do not get into jeopardy or get lost”.

Micheál Martin told Social Democrats TD Holly Cairns that if the Minister for Children did not act “the records disappear for all time”.

Ms Cairns and People Before Profit TD Bríd Smith insisted it was not true the records would disappear.

And Ms Smith told him not to tell lies when he said there was “no agenda to try to suppress records”.

Mr Martin said the fundamental issue was what to do with the records and how to release them.

The Ceann Comhairle told Ms Smith not to accuse the Taoiseach of telling lies.

Ms Smith said, however, that “he needs to retract his statement that the records will disappear. They will not disappear”.

Ms Cairns had urged the Taoiseach to call a halt to the legislation which has been passed by the Seanad, and said if passed in its current form it would amount to a gagging order by sealing records for 30 years.

She insisted the interests of survivors would not be served and the State would be continuing to hide information.

Ms Cairns said the systems of the State “have done enough damage and it is time for this to stop”.

The Commission of Investigation (Mother and Baby Homes and certain related matters) Records, and another Matter, Bill 2020 provides for a database of records to be transferred to the child and family agency Tusla.

The Bill was introduced after the commission last month said legislation would be necessary for the safe transfer of its database of 60,000 records of residents and survivors of mother-and-baby homes.

Ms Cairns accused the Taoiseach of being a part of the then Bertie Ahern-led Government that “brought in a gagging order, further compounding survivors’ trauma caused by institutional abuse”.

She said Mr Martin had admitted it was a mistake and called on him not to repeat the mistakes of the past by passing the legislation which is due before the Dáil on Wednesday.

Ms Cairns said it was done “with a gagging order around it”.

Mr Martin said, however, that he went beyond what most people wanted done at that time and “did it in the interests of the survivors of industrial schools”.

But the Social Democrats TD said of the records: “They are about to be sealed for 30 years”.

“We are not going to seal these records either. That is not the agenda,” Mr Martin insisted. “Let’s not try to undermine the good faith of people involved.”

He said Ms Cairns knew there was an issue that if the Minister did not act “the records disappear for all time”.

When Ms Cairns and Ms Smith insisted this was not the case the Taoiseach pointed out that “there has been a constitutional issue about access to records for a long time that predates this issue”.

He said the previous minister for children did not resolve it. “There are two steps. We need to preserve the records in the first instance and ensure they do not get into jeopardy or get lost. That was the objective of the former Minister. The second step is how we make the records available to those who need them.”