Commission report answers some questions on Tuam and raises others 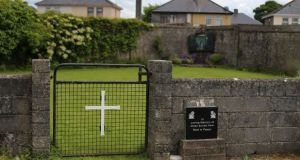 The report of the Commission of Investigation of the Mother and Baby Homes, as promised by Minister for Children Katherine Zappone, answers some questions, raises others, and leaves others unanswered. Nowhere is this more the case than in its most lengthy chapter, on the home in Tuam.

The report found that 973 children died at the institution or shortly after spending time there, 802 in Tuam.

It reveals fresh details about the burials in a suspected sewage tank, the history of the site, and raises pressing questions for survivors and victims families, but also about how much was known by Galway County Council, which owned the site, and the Sisters of Bons Secours, who ran it.

There is, the report finds, “remarkably little official documentation available about many aspects of the Tuam children’s home and there is virtually no information about burials in the documentation seen by the Commission”.

While there are references to health inspections of the home, only one has been seen by the Commission. That report, and files from the Department of Health, contain no mention of burials. Death records have passed from Galway County Council to the Western Health Board, onwards to the HSE and then to Tusla. These also contain no information about burials. The Commission is “concerned that some records may have been lost or destroyed over the years” which may have had burial information.

A handwritten note on Department of Health file from 1969, relating to the possible closure of some mother and baby homes, provides the first documentary evidence of awareness about the possible existence of a children’s burial ground on the site.

It states: “Surely the story about the Waterworks is not true? Do M [a section of the Department at the time] get police reports on abandoned dead babies?”. The Commission says it cannot be sure the note relates to Tuam. The likely author of the note is now dead.

A number of local people were interviewed by the Commission, but none of them had direct knowledge of burial practices.

One woman said she was told by a former worker in the Home that the dead babies, including stillborn babies “were swaddled and buried”, but she did not ask where or how. The two men who, as boys, found evidence of bones at the site were also interviewed.

A third person gave evidence of seeing a child running around the grounds with a skull on a stick, which she took. When investigating where it came from, she said she fell into a structure which was full of the swaddled bones of children. A local woman told the Commission that she remembered mounds of earth being collected during the construction of a housing estate nearby, and that bones were visible in these mounds.

A Garda investigation in 2014 found that the burial ground was three times larger than the area currently maintained by local people as a “memorial garden”.

During excavation of the structures at the site, a glass baby bottle dating the 1920-1940 period was discovered. Small enamel tin cups were also found, one type of which had a nursery rhyme imprinted on it. It dated to the same period.

Access to the chambers where bones were discovered is only possible through narrow openings “clearly not designed with human access in mind”.

“This raises the question of where the children who died before then are buried,” the report found.

Bones found in the chambers were often ‘articulated’, meaning that they are found in an order that suggests the body decomposed in situ. Some bones, specifically a humerus and a skull, may have been deposited from elsewhere. All the bone samples produced age ranges within the period of operation of the Children’s home. Soil sampling suggested that “at least some of the chambers in which human remains were found were at some stage used to receive sewage”, although the primary component in the samples was from decomposition rather than sewage”.

Artefacts found during excavation included a piece of timber which had an “unusual angle reminiscent of the angles often seen on coffins”. Other pieces of wood that did not seem consistent with being used in the construction of the chambers were found, and possible wickerwork was identified.

The Commission concludes that “it seems clear many of the children who died in the Tuam Home are buried in the chambers described”.

“This was not a recognised burial ground or purpose built chamber. It did not provide for the dignified interment of human remains.”

The Sisters of Bons Secours

A small number of documents were provided to the Commission by the Sisters of Bon Secours, none of which made any reference to burials. The only surviving member of the order who served in the home did so only for a few months. In an affidavit, the country leader of the order said that the sisters are “shocked and devastated” by what has come to light. She argued in the affidavit that it was common practice for so-called ‘Angels’ Plots’ not to be publicly marked. She expressed “deep sorrow and apologise(d) unreservedly” for the failure to provide a proper burial.

When provided with a draft of the Commission’s report and technical examinations, the order commissioned an archeologist to review the reports. That report suggested that the Commission had not adequately considered whether the structure where human remains were found was designed as a burial vault and then used as such. The report commissioned by the order also suggested that the Commission had not considered comparable sites. The Commission’s report points to several features that suggest the structure was used as a sewage facility, and said none of the sites suggested as comparable by the order were similar enough to be considered.

The report also states that there is likely more knowledge in and around Tuam about what happened at the site. “The Commission considers that there must be people in Tuam who know more about the burial arrangements and who did not come forward with the information,” it says.

“It is, of course, still possible for them to come forward.”

Role of the local authority

Tuam was unusual in that the facility was operated by the Sisters of Bons Secours, but on a site owned by Galway County Council. The report of the commission shows that the local authority had significant insight into matters relating to the home. For example, it made the decisions on who entered the home, it paid directly for repairs, rates, water rent and insurance. It also paid the salaries for the chaplain and the medical officer, and for the services of the maternity nurse, as well as a capitation rate to the Sisters for the upkeep of the residents.

The Galway Board of Health, which made many of the decisions relating to the Home between 1925 and 1942 was composed of members of Galway County Council. A sub-committee of that group, the County Home and Home Assistance Committee, also had a role, and several non-council members sat on it. Both these groups held a number of their meetings in the home itself.

Minutes from the Galway Board of Health contain a number of references to coffins being tendered - without specific reference to burials, or the coffins being purchased.

“The coffin tenders are for various sizes of coffins and seem to have been issued at six month intervals. The cost of the large coffins was questioned a number of times.”

The commission found that because Tuam was owned by the local authority, general rules on burial grounds should have applied - including a legal requirement to keep a register of burials. “There is no evidence that such a register was compiled.”

The Commission considers that there is evidence from County Council archives that the local authority was aware of the existence of a children’s burial ground in the early 1970s.

In 1991, a priest acting on behalf of residents complained of the condition of “the children’s burial ground in the former Home in Tuam,” with “bones being exposed quite often as a result of children and animals digging”. An engineer sent to investigate found no evidence of bones being exposed. There is a suggestion that this complaint was one of many about the site.