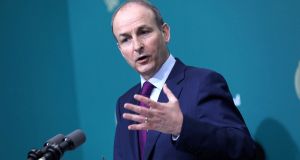 Taoiseach Micheál Martin introducing the publication of the report by the Commission of Investigation into Mother and Baby Homes at Government Buildings on January 12th, 2021. Photograph: EPA/Julien Behal

Two redress schemes, one for some children born in the homes and another for some women who gave birth in the homes, have been recommended by the Commission of Investigation into Mother and Baby Homes.

The commission said redress could be financial or in the form of enhanced services, although it noted that many and probably most former residents were managing their lives well and it should not be presumed that they required services such as counselling or enhanced medical care.

The commission said if the Government is to implement redress then the relevant comparable schemes are the Residential Institutions Redress Scheme (RIRS), and the Magdalene laundries scheme.

The former would be relevant for children who lived in mother and baby homes and suffered abuse, and the latter for women who resided in the homes and had to do work for which they should have been paid.

The residential institutions scheme was put in place for former residents of industrial schools and some orphanages and hospitals who had suffered abuse. By the end of 2018 it had paid out 15,581 awards totalling €970 million. Slightly more than 1,000 awards were withdrawn, refused or led to a nil award. Total legal costs by the end of 2018 were €193 million.

The scheme is all but complete now, but the administration is still in place and, the commission has suggested, could be used for the mother and baby homes scheme.

The criteria for inclusion in the suggested scheme is for children who remained in an institution for an extended period or beyond the time when their mothers left the home, and who suffered abuse.

As some of the mothers were themselves younger than 18 years, they too would qualify for the scheme.

The commission said it had heard of some instances of physical abuse of children, though it was not at the level of that in industrial schools.

There was evidence found of emotional abuse. The commission noted that the abuse suffered by former Tuam child residents came at least, if not more, from local residents and school-going children as from the institution itself.

The Magdalene laundries scheme was an ex-gratia one meaning women were paid certain amounts depending on how long they had been in a laundry.

Women in the mother and baby homes were subjected to emotional abuse, but there was “little evidence” of physical abuse and none of sexual abuse, the commission said.

Most of the women were not required to do commercial work, though they did do work such as cleaning the homes, cooking and carrying out farm work.

However, women in county homes had to look after other residents as well as themselves and their children, and were not paid for this.

In Tuam, mothers frequently left the home years before their children. As a result mothers in the home often had to mind other women’s children as well as their own. Also, mothers in some of the homes may have worked outside the homes, such as in hospitals.

The commission has recommended that women who fall inside these three categories be eligible for redress, as well as women who spend more than six months in a home before 1974 (the year after the introduction of the unmarried mother’s allowance).

It said the details as to who would receive redress, and how they would qualify, was a matter for the Government.