Claims ’bogus’ that legislation needs to rushed through Seanad - McDowell 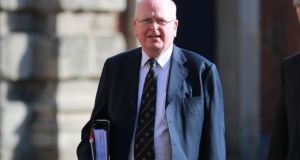 Claims that legislation dealing with the records of the Commission of Investigation into Mother and Baby homes must be passed by the end of the month have been described as “bogus”.

Independent Senator Michael McDowell called for extra time to be given to debate the legislation and said the House should debate committee stage on Friday leaving the report and remaining stages for a later date.

The controversial Bill provides for an archive of material and information to be sent to Child and Family Agency Tusla with remaining records from the commission to be sealed for 30 years.

Following a five-year investigation the commission will issue its final report at the end of the month. The legislation was described as necessary to ensure the database is retained as without it, the archive would be sealed following the winding up of the commission.

The commission suggested last month that specific legislation was necessary to safeguard and transfer the records of the women and children resident in mother and baby homes.

The Commission of Investigation (Mother and Baby Homes and certain related Matters) Records, and another Matter, Bill provides for the database of records to be sent to Tusla.

But former residents of the homes have said they will not be able to access the records retained by Tusla and that the remaining records will be sealed for 30 years under legislation passed in 2004, the Commissions of Investigation Act.

But Mr McDowell said it was “bogus to say there is a hurry in passing this legislation”.

The former attorney general introduced an amendment to take report stage at a later date.

He said the commission “needs, wants and should be given extra time” to deal with the additional significant administration involved in finalising its work and he introduced an amendment to order the business

Sinn Féin Senator Fintan Warfield backed his amendment and said there had been “unprecedented engagement on this Bill” from survivors of mother and baby homes.

He said it was not a good image that the Seanad was seen to concentrate its “critical engagement” on the Bill in a few hours.

Labour Senator Marie Sherlock said rushing through the legislation would be “unnecessary and unjust”.

“These are people’s lives”, she said, “we need time to listen and consider the 38 amendments put down”. And Independent Senator Victor Boyhan said time was needed to debate the legislation.

Sinn Féin Senator Paul Gavan hit out at what he called an attempt to railroad the legislation through the House.

He said the Bill was not an emergency and was progressing in the face of “huge concern from thousands of people. And the very reasonable request is that we pause it after committee stage.”

Mr Gavan said that in the emails sent to politicians by survivors, many gave personal harrowing testimony.

“So to push this through to railroad it through because you have the numbers is frankly disgraceful,” he told the Government parties.

Seanad leader Regina O’Doherty said she could not accept the amendment because the Bill is scheduled to go before the Dáil next week.

The amendment was defeated by 33 votes to 17.

The National Women’s Council (NARC) has also expressed concern about the fast-tracking of the legislation.

Director Orla O’Connor said the agency was worried that it was being “rushed through” the Oireachtas.

“This State has failed so many women and children in this country who suffered immeasurable institutional abuse and trauma,” she said.

“It is our responsibility now - as a minimum - to address the serious concerns the survivors and the families of survivors are raising and ensure that their rights to information and access to their identity are being respected.”