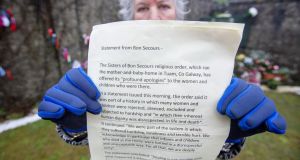 Carmel Larkin, a survivor of the Tuam mother and baby home, with a letter of apology from the Bon Secour order, at a shrine erected in memory of children buried at the site of the former home. Photograph: Paul Faith/Getty Images

The Bon Secours sisters, who ran the mother and baby home at Tuam, yesterday yesterday offered “profound apologies” and acknowledged that children were buried in a “disrespectful and unacceptable way”.

The order said it did “not live up” to its Christianity when running the Co Galway facility between 1925 and 1961.

The congregation offered “profound apologies to all the women and children” of the home, to their families and to the people of the country.

Tuesday’s mother and baby homes commission report “presents a history of our country in which many women and children were rejected, silenced and excluded; in which they were subjected to hardship; and in which their inherent human dignity was disrespected, in life and in death. Our Sisters of Bon Secours were part of this sorrowful history,” the congregation’s area leader Sr Eileen O’Connor said.

‘Dignity of the women’

“We failed to respect the inherent dignity of the women and children who came to the home. We failed to offer them the compassion that they so badly needed. We were part of the system in which they suffered hardship, loneliness and terrible hurt. We acknowledge in particular that infants and children who died at the home were buried in a disrespectful and unacceptable way. For all that, we are deeply sorry,” she said.

She said healing was not possible “ until what happened is acknowledged” and they hoped healing could come to all those affected.

Altogether 2,219 women and 3,251 children had been in Tuam, which was not exclusively a mother and baby home but also accommodated children of destitute and homeless families. A total of 978 children died at the home, 80 per cent were aged under a year.

In an interim report last year the commission confirmed that it is likely that a large number of the children who died in the Tuam home are buried in the memorial gardens.

Historian Catherine Corless, whose work in exposing the deaths and burials of children at Tuam had been instrumental in setting up the inquiry, welcomed the apology. “This is exactly what I’ve been looking for,” she said. “I’m very happy with that. It really means an awful lot to us.”

Elsewhere, Catholic Archbishop-elect of Dublin Dermot Farrell said the report revealed “profound injustices perpetrated against the vulnerable in our society over a long period of time – against women and children whose lives were regarded as less important than the lives of others”.

“A genuine response is required: ours – as a church and a society – can only be a full apology, without any reservation, ” he said.

Archbishop of Tuam Michael Neary acknowledged “and humbly ask forgiveness for the abject failure of the church for the pain and suffering visited on those women and their children in the mother and baby homes nationally.”

While the diocese never had an administration role in the running of the Tuam children’s home “it had a pastoral one,” he said apologising “unreservedly”.

Bishop of Cork Fintan Gavin felt “a sense of shame and embarrassment for how as a church and a society we failed so often to respond compassionately to their needs,” on reading the report. The Bessborough Home was in Cork.

Bishop of Meath Tom Deenihan said the report cast “a necessary light into a painful episode in our social history.” “I am saddened and shamed by this report,” he said.

In a joint statement Bishop of Raphoe Alan McGuckian and Bishop of Derry Donal McKeown said there was “no doubt that the church contributed greatly to the culture which was, as the report says, ‘harsh and uncaring’ in relation to women who deserved only kindness and support.”